Edit
watch 01:54
Arcane: League of Legends - The Loop
Do you like this video?
Play Sound
“You know what I love about this band, it's about the music. Wait, no, it's about not being killed by demons.'”

ZITHER! is a player-controlled protagonist in Dragon Age: Inquisition's multiplayer.

ZITHER! was once a household name in Orlais, playing for packed auditoriums of nobility and commoners alike. But then the Circles rebelled, his Templar manager, Alfonse, tried to kill him, and he frittered away all his gold drinking in a riverside tavern in Cumberland for the next two years, unable to get a gig. The Inquisition is his one chance at a comeback tour, and he's going to grab it with both bejeweled hands.

This section contains spoilers for:
Trespasser.
ZITHER! performs at the Winter Palace during the Exalted Council. Provided Cole was made to be more like a spirit during his quest, Cole encourages Maryden Halewell, the Inquisition's minstrel, to meet with him (unless the Bull's Chargers survive the events of Iron Bull's Inner Circle quest, at which point ZITHER! is passed over for Cremisius Aclassi).

ZITHER!, the Virtuoso, is the Inquisition’s first musically inspired multiplayer agent. Although a mage by birth, his true strength—like his heart—lies in his music. When he plays, ZITHER! infuses his lute with the elemental powers of rock and roll. These elements provide a cacophony of different effects, either aiding the party with Crowd-Pleasers or wreaking aural havoc on his enemies with Battle Hymns. The Virtuoso’s gameplay is very different from existing Inquisition classes. ZITHER! always has 4 abilities mapped, 3 “Notes” and 1 “Song”: the notes are Fire, Ice, Lightning, and players unlock Songs in the ability menu. For example, “Cool Beats” requires Fire, Fire, Ice, while Mark of the Riff! calls for Fire, Ice, Lightning! The Virtuoso typically plays a strong support role for your party, but he can easily focus entirely on offense or become a hybrid of both styles—just don’t get stage fright and forget how to play your Songs!”

(During the Exalted Council, when reuniting with Cole)

If the Bull's Chargers did not survive Demands of the Qun: 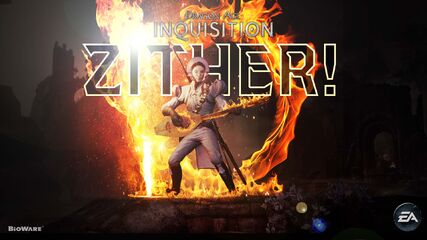 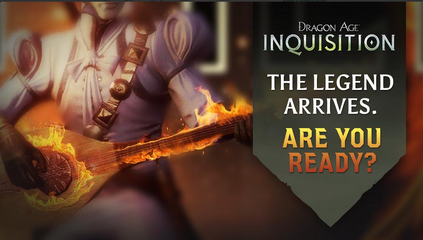 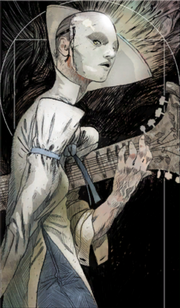 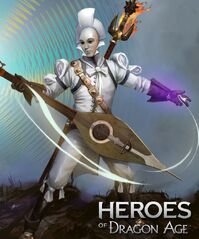 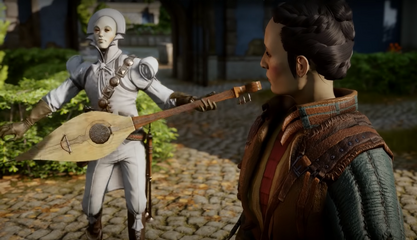