“In destroying what it does not understand, mankind would destroy itself.”

Witch of the Wilds

Yavana is an infamous Antivan Witch of the Wilds known as the Beast of the Tellari swamps.[1]

Yavana is a mysterious figure that features in many Antivan legends. According to some, Queen Madrigal made a deal with her after the witch had foretold her death, to save her son, Prince Eladio. When Eladio grew ill, Madrigal rode into the woods to challenge Yavana. She was later found, pierced with four swords, an act which named the following age. Afterwards, Eladio mysteriously recovered, only to vanish without a trace a year before his coronation.

Other stories claim that Yavana defended the city of Seleny during the First Qunari War by calling a dragon, while others believe that she prophesied the return of the dragons near the beginning of the Dragon Age.[2]

She appears before Alistair, king of Ferelden, Varric Tethras and Isabela when they venture into the Tellari swamps to locate her. She soothes a high dragon that was attacking the trio.

Yavana discusses Flemeth, her mother, and Morrigan, her sister before Alistair demands answers about Maric. Yavana leads them to the Silent Grove, explaining it is a haven for dragons who would otherwise be hunted to extinction by mankind. Isabela mocks this, and Yavana tells her that the blood of the dragons is the blood of the world. She goes on to reveal that Flemeth saved Maric's life during the Fereldan rebellion, and made him promise that he would come to Yavana once his children came of age. She explains that she needed him as she could not "complete her task alone." Upon Varric's questioning, Yavana says that she did not kill Maric, but she cannot speak for others. She refuses to say anymore, advising Alistair to abandon his quest, as what he seeks is forever beyond his reach.

After being wounded, and Alistair kidnapped by Prince Claudio Valisti, Varric and Isabela retreat to the Silent Grove to demand Yavana's aid. She refuses, saying it is none of her concern. Varric barters with her, however, and she places a mysterious enchantment on the pair, telling them to go and save their friend. When questioned on what she will gain, she only replies that the two will "play their part."

After Prince Claudio Valisti's death at Isabela's hand, Yavana summons back his spirit from The Fade to interrogate him. After some threats and coercing, the spirit reveals the name of his master - Aurelian Titus. Intrigued, Alistair asks who the master is exactly; Yavana refuses to reveal any more details, other than that she had sought the name for a very long time now.

Yavana reveals to Alistair the truth about Maric and his bloodline; the builders of the temple had secreted away the very few dragons that remained, and Yavana had been reviving them. However, the Great dragons were beyond her reach until she had access to the blood of King Calenhad the Great, which called to the Queen of the Dragons and awoke her.

Yavana prompts Alistair to awaken the last of the Great dragons, as Maric was meant to and search for the master and Maric together. She tells him that this will relieve him of the burden of the crown; however, Alistair refuses, driving a blade through Yavana's stomach, killing her.[3] 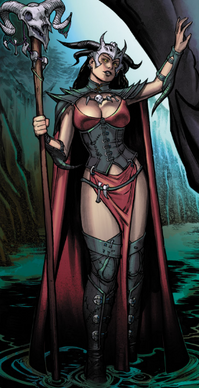 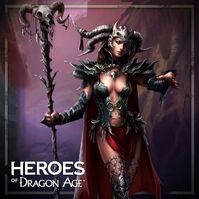 Promotional image of Yavana in Heroes of Dragon Age

Tier progression of Yavana in Heroes of Dragon Age