Xenon the Antiquarian is the owner of the Black Emporium, located deep under the streets of Kirkwall.

Xenon is an ancient being who is approximately 400 years old.[1] He was once a Kirkwall nobleman living in the Steel Age. Extremely wealthy, and equally arrogant, he believed that someone as high-ranking as himself should not have to succumb to death, and so spent many years and a large amount of his fortune in search of a way to live forever.[2]

Eventually, he found an Antivan Witch of the Wilds, and made a deal with her to attain eternal life. She granted him his wish, but he, unfortunately, forgot also to ask for eternal youth. [1][2] His body withered and decayed over the centuries. Xenon used his fortune in an attempt to preserve his body using mystical and dangerous means, but no method has ever been successful.[1] Finally no longer able to move on his own, he went into hiding in the Undercity and began collecting strange and rare artifacts. He extends invitations to his shop only to people he deems worthy: those who have enough money to fund his search for a cure against aging.[1] The many servants who take care of him still hunt to find a way to reverse the effects of aging and return him to his once youthful state.[2]

Xenon is immobile and uses a magical artifact to imitate speech since he lost the ability to speak.[1] He sits in the center of his emporium and appears to have an excess of limbs. He is bathed hourly to keep his body from drying up.[1]

Xenon sends Hawke a letter at the beginning of Act 1, an invitation to The Black Emporium, along with instructions on navigating the Undercity to reach the shop and a charm that acts as a pass.[3] At Hawke's initial visit to the Black Emporium, Xenon is excited to have a customer. He keeps an urchin boy as his assistant, and a stone golem, Thaddeus Gigantus Crumbum the Third, provides security and theft protection. Xenon claims Thaddeus is his "favorite".

In each act, more of Xenon's artifacts become available in The Black Emporium to unlock codex entries, and Xenon adds new items to his inventories.

Years later, Xenon extends an invitation to the Inquisition to come and partake of his wares. Though the golem does not seem to be present when the Inquisitor visits, they do encounter a miniaturized bear named Chauncey that Xenon has acquired from a Magister sometime in the past few years.

Xenon's servants have apparently been busy over the last few years acquiring many new artifacts and items, including legendary crafting schematics, and rare armor, weapons, and accessories. 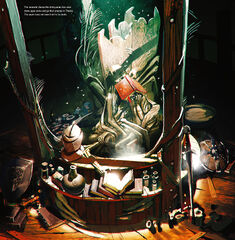 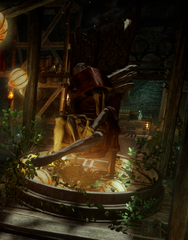 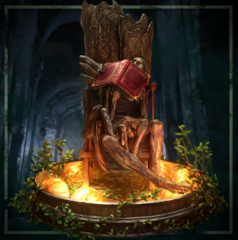 Retrieved from "https://dragonage.fandom.com/wiki/Xenon_the_Antiquarian?oldid=890892"
Community content is available under CC-BY-SA unless otherwise noted.