Edit
watch 03:01
Wiki Targeted (Games)
Do you like this video?
Play Sound
“They are exceptional beasts. Magnificent cousins to the mighty dragon. My only advice: beware their poison. It's the deadliest thing about them. As well as the most valuable.”

Dragon Age II:
Heart of the Many
Baiting a Wyvern
Inquisition:
Bring Me the Heart of Snow White
The Naturalist
Wyrm Hole

The wyvern is a member of the dragon family and is especially important to Orlesian culture.[1]

An adult wyvern is nearly the size of a full-grown dragon, but while both have saurian appearance, a dragon is more lithe and serpent-like where a wyvern is more sturdy and has thicker musculature. A wyvern’s head is stout and squarish with a split-mandible mouth and protruding fins. These are colorful creatures, garish and fierce.

Although historically categorized as smaller cousins of drakes and dragons, wyverns differ distinctly from other dragon-kind in both physical form and demeanor. Wyverns lead solitary existences, stubbornly defending their territory against trespass by other creatures, including other wyverns. Bullish wyverns even defend their turf against dragons that might well be able to best them in battle. Wyvern territories sometimes overlap with each other, as multiple wyverns may be drawn to the same feeding grounds or water source, but not for long. Showy, noisy displays of dominance and foul-smelling wyvern spoor serve to settle most contests between their kind, driving each wyvern to ferociously defend whatever ground it can claim.

The wyvern’s natural habitat lies within only a few mountain ranges of Thedas, although wyverns are most numerous in the lands of Orlais[2]; they prefer rocky lands, in some places barren, in others verdant, where they can dwell as an apex predator. Wyverns typically do not discern between intelligent and unintelligent prey. They are as likely to eat ranging cattle, feral wolves, family pets, and civilized folk if given the need and the opportunity. Often, wyverns inflict their venom on prey and then leave them to wander and die, perhaps as some base animal sense of sport, or perhaps out of simple ease.

Wyvern wings are hardy but imprecise things. A wyvern does not truly fly; rather, they glide along air currents. With a suitable perch and favorable winds, a wyvern can glide over many miles, stalking prey and surveying its territory. With their strong claws, they can grip and climb even vertical stone to achieve good perches and altitude. A wyvern can also leap many times its own body length, not unlike a dragon. They are quick, powerful skirmishers, seldom staying put during a contest of might.

Despite all that, the most dangerous aspect of a wyvern is its venom. When provoked, wyverns spit poison out to a range of several yards. Left untreated, this poison is fatal.[3][4] Wyvern venom slows prey and kills gradually. Once afflicted, a target is in mortal danger. After a few moments, however, venom exposed to air becomes far less dangerous. Thus it is essential to harvest wyvern venom quickly and carefully if it is to be stored for future use by, say, poisoners or for use in alchemical concoctions.[5]

Venom and its uses[]

Its venom makes the wyvern widely sought by potion makers, alchemists, and crafters of a potent liquor called aquae lucidius. A minuscule quantity of wyvern venom remaining in the aquae after distillation results in a unique hallucinatory effect.[6] Just how effective wyvern venom is at enhancing potions and alchemical recipes is either a closely guarded secret or a continuing mystery; opinions differ.[7]

The venom of the wyvern is most potent and gives rise to a family of poisons developed in Antiva. They are recognised by a crimson speckling of the skin. Havard's grief is one such poison derived from wyvern venom.[8]

When properly prepared, the venom is its own antidote.[8] Otherwise, there exists an additional antidote to the venom, and it requires three herbs that are not particularly rare, in general; Andraste’s mantle, drakevein, and winterberry. However, should one be bitten by a wyvern and the herbs be unavailable (or out of season), the venom will continue unabated, leading to nothing but misery, pain and eventually death.[9]

Wyvern venom can be extracted from the creature's liver, and put to good use in the more rural communities for coping with common vermin plagues.[10]

Wyvern defensiveness is legendary. Orlesian hunters tell tales and sing songs of female wyverns killing even high dragons that wandered too close to their nests. As ferocious, territorial creatures, they are often compared to knights or depicted as wild warriors. From Orlais to Gwaren, wyvern symbols and devices mark the heraldry of knightly lords and ladies both low and lofty. Bandits and brigands who draw on wyvern imagery for their strength do so to elevate their own station or to mock landed lords. Some realms even consider the image of a wyvern to be so cherished and fearsome as to make it a crime to bear a wyvern banner or standard without proper authority.

The wyvern is so prized and celebrated by some, in fact, that it has been hunted nearly to extinction. The Monfort Family in particular, hosts an annual wyvern hunt at Chateau Haine in order to keep their population down, a spectacle which has become a popular social event in itself.[11] Wild wyverns are feared and honored creatures, full of portentous meaning. To slay one is a kind of trial by combat. In parts of Thedas, it is considered shamefully presumptuous (or even illegal) to hunt a wyvern and fail… but dashing and praiseworthy to succeed at it. To think oneself worthy of the wyvern hunt shows a bit of smirking arrogance. To succeed in the hunt shows that one is worthy.

The rich gentry and nobility of Orlais are particularly fond of the wyvern chase, a festive and competitive hunt for the rare creature. It is a drawn-out affair involving feasting and pomp and sharp rivalries (some friendly and some not). Many participate in the chase with little hope of actually finding (much less besting) the beast. Separating legend from lore is one part of the challenge; keeping one’s wits when near wyvern territory is another part.

Often it is servants and hunting dogs that undertake the true work and notorious risk of the chase, as they attempt to flush out or track the famed creature. They strike out into the countryside to rile or pursue the powerful, poisonous beast while their noble masters lead from the rear, sipping wine and accepting the praise of a successful kill.

While it is rare for people or hounds to be killed during a wyvern chase (wounded hunters are often left to die by the wyvern, but not by fellow hunters), casualties of the hunt are not so shocking as to break the tradition. Brewing draughts of antidote to the wyvern’s venom is part of the festive tradition, too.[12]

Wyverns, proud and fearsome as they are, have made their way into folklore and legend throughout all of Thedas. Perhaps no wyvern tale is so well known as the one concerning the beasts and the beloved Andraste. The Chantry considers the tale a wild superstition.[13]

Andraste and the wyvern[]

The armies of Andraste and Maferath gathered in the West. And the Prophet went alone into the mountains to sing to the Maker. She would take no one but Justinia and Maferath with her.

They climbed until they came to a hanging valley with a small lake - still and clear, perfectly reflecting the sky - and there Beloved Andraste said they would rest. She sat down on the lakeshore and said to her dear companions, "Wait with me, my friends. And whatever happens, have no fear." Then she began to sing.

As she sang, the mountains bent to listen. Stars came down from the heavens to be near her. Birds and beasts of every variety came forth and knelt at Andraste’s feet. Justinia and Maferath witnessed this and were afraid.

Then from the sheer cliffs a great wyvern appeared, baring its fangs and drowning out the Prophet's song with its roars. The beast descended from the cliffs like a thunderbolt from the sky. Maferath drew his sword and struck at the wyvern, slicing off part of its hood.

But the Prophet put her hand on Maferath's sword arm and stopped him. And the wyvern came to Andraste's feet and knelt, and when it rose, it left blood on the ground, dripping from the wound Maferath had given it. And Maferath was ashamed that he had given in to fear despite Andraste's words. He drew his hand along the blade of his sword, spilling his own blood and adding it to the wyvern's. At this, the beast nodded once in acknowledgment and then vanished as swiftly as it had appeared.[14]

Wyverns are mentioned by Father Kolgrim, who states that drinking prepared wyvern's blood can imbue someone with the powers of a Reaver.

Wyverns are a significant enemy in Mark of the Assassin. Hawke and the gang hunt a wyvern, and later battle Duke Prosper's wyvern mount, Leopold.

Wyverns can be found in the Hissing Wastes, especially in the Golden Oasis. Additionally, there is a quest in Crestwood (Wyrm Hole) that involves killing three wyverns. Once the lake is drained in Crestwood, a couple of wyverns spawn in the abandoned Old Crestwood village, along the lakeshore.

Fereldan Wyvern Statues can be found as a landmark in Crestwood. A similar statue can be found in the Fade during the main quest the Final Piece.

Collecting the heart of a snowy wyvern is also the subject of Vivienne's companion quest Bring Me the Heart of Snow White. 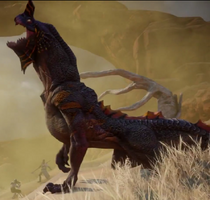 A wyvern in Dragon Age: Inquisition

A Wyvern in Heroes of Dragon Age 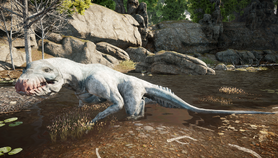 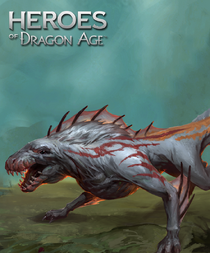 A Snowy Wyvern in Heroes of Dragon Age 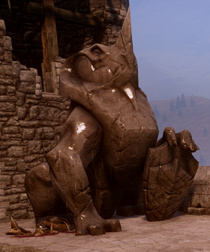