Dragon Age Wiki
Register
Don't have an account?
Sign In
in: Dragon Age: Inquisition side quests, Crestwood side quests

Wyrm Hole is a side quest in Dragon Age: Inquisition.

An aggressive wyvern is harassing Crestwood's villagers. It lives in a cave up in the hills. A woman named Judith outside of town seemed interested in the body if someone manages to kill it.

Look for Judith, preferably during the side quest the Naturalist, at the Forester Homestead in Crestwood (southeast of Caer Bronach and south by southwest from the Three Trout Farm Inquisition Camp. Her farm is also the location of one of Crestwood's three astrariums. She will mention a wyvern, and upon inquiring further, the Inquisitor learns that she could use the wyvern's liver for some rat poison if someone would only kill the beast.

Travel to the Glenmorgan Mine north by northwest of the Three Trout Farm Inquisition Camp and enter the cave in the upper Red Templar / Venatori encampment [1] (where another astrarium is located).

The path will eventually lead to a hidden pond, which is home to several wyverns (two at level 11 and a larger one at level 14 or 15; all three are elite ranked). Killing the largest, by provoking and luring it away from the flock with ranged or magic attacks, is the only one needed to satisfy Judith's request. Loot the wyvern and return to Judith for the reward. 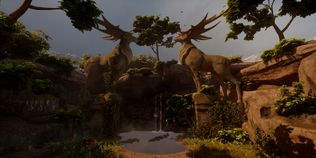