The Winterwatch Tower is a mountain keep located in the Hinterlands.

The keep was constructed by Arl Tiranon Guerrin, to serve as a temporary residence for his eldest son Lornan. As Lornan had not lived up to the expectations of his father, Arl Tiranon tasked him with cleaning the surrounding mountains of bandits, not permitting him to return to Redcliffe until he had done so.[1]

A cult has formed in the area, taking up residence in the keep. The cult believes that the Breach in the sky has been opened by the Maker, to take His faithful followers back to the Golden City.[2][3] Additionally, due to the ongoing war between mages and templars, some refugees have joined the cult in hope to be safe in the mountains, further away from the conflict area.[4]

Praise the Herald of Andraste

Bottles on the Wall[edit | edit source]

The Fall (piece #5) - found on the top floor of the tower, to the left of the elven artifact.

At the top of tower at the north end of the keep. 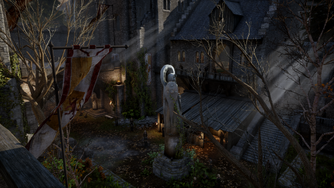 The keep's courtyard
Add a photo to this gallery

Retrieved from "https://dragonage.fandom.com/wiki/Winterwatch_Tower?oldid=884697"
Community content is available under CC-BY-SA unless otherwise noted.