The White Spire is a tower in Val Royeaux used by the local Circle of Magi and as a templar stronghold.

The White Spire can be seen from anywhere in Val Royeaux, even during the night. The white tower is lit by magic, seen by some as looking like a sword thrust into the sky.[1]

Phylacteries of all White Spire mages are kept within the tower in a locked chamber, as well as those of the First Enchanters of every Circle in Thedas. The phylactery chamber can only be opened by a mage, typically the First Enchanter, and a templar, working together to open the magic lock, to ensure security.

The middle levels of the tower are occupied by the mages, while the templars reside in the upper floors and have a view of the entire city from that height. The first few floors of the lower levels are kitchens and armories. Below that are ancient archives, some containing forbidden texts.

Initially the tower served as the ruling fortress of Emperor Kordillus Drakon I, who founded the Chantry. His old throne room is used as the main entrance to the tower now. As a relic from that time, there are numerous dungeons with ancient torture chambers in the lowest levels of the tower. These levels are called "the Pit," and the dungeons lay at the center of the Pit, hundreds of cells on multiple levels. The Pit also houses many lost levels containing flooded chambers, an ancient templar mausoleum, old passageways, and forgotten relics.

The White Spire also houses the Knight-Vigilant, the leader of the Templar Order, who commands the templars from within.[2]

In 9:22 Dragon, a young female elf mage named Avexis is kidnapped from the tower. Avexis posseses the power to enthrall animals. She is taken by blood mages led by Frenic and Knight-Commander Martel, who intend to use her powers to control a high dragon. Frenic and Martel plan to kill the Divine and replace her with Grand Cleric Callista, who would in turn give Martel unlimited power. The conspiracy is stopped by the Seekers of Truth working with the mages of the White Spire; among these Circle mages is Regalyan D'Marcall.

The templars seem to hold a looser grip on the mages of the Circle, as the magi are seen outside the tower in great numbers, holding various hideouts through which they keep tabs on apostates, and aiding the Seekers in their fight against corrupted templars and dragons attacking the Grand Cathedral.
This section contains spoilers for:
Dragon Age: Asunder.

For years, the Spire was rumored to host a ghost who killed mages. Enchanters complained to Knight-Commander Laroche, arguing that templars must be responsible for both the murders and the rumors, though a thorough investigation uncovered no evidence. Eventually, Knight-Commander Laroche declared the deaths to be suicides. After Knight-Captain Evangeline reported his handling of the situation, Laroche retired and was replaced by Knight-Commander Eron. Tensions between mages and templars increased as more mages were killed. Knight-Commander Eron was eventually supplanted by Lord Seeker Lambert, who pledged to uncover the culprit.[3]

The Veil is thin at the White Spire, which allows for greater communication with spirits. This allows for Enchanter Rhys's research into spirit mediumship and makes him a useful mage for Wynne's mission.

After Edmonde's death, Adrian becomes the First Enchanter, though there is no longer a Circle Tower to preside over. Shale, by Wynne's request, destroys the phylacteries housed in the tower, thereby freeing all First Enchanters from the templars.
This section contains spoilers for:
Dragon Age: Inquisition.
If Cullen's suggestion is taken during the war table operation the Archives of Montfort:
The restored Inquisition uses the White Spire to store the assembled records from the Chantry Archive in Montfort for safe keeping. 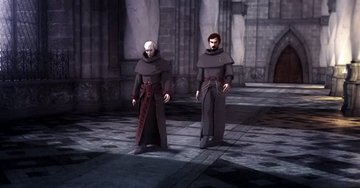 An interior view of the White Spire