For the keep located in this region, see Griffon Wing Keep.

The Western Approach is a large, arid expanse in southwestern Orlais.[1] Farther west lie the Hunterhorn Mountains and uninhabited steppes and forests. 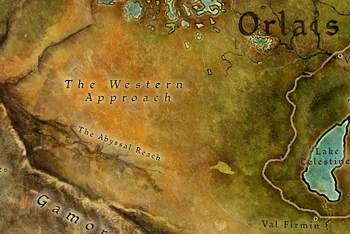 The wastes in The Approach were once a land of plenty. The rain came north over the Gamordan Peaks, turning the plains green and verdant for several months of the year. However, eight hundred years ago, that all changed.[2] The Approach became the site of a major battle during the Second Blight. The darkspawn swarmed out of the Abyssal Rift, a great chasm to the south, and corrupted it with their foul blood never allowing for the land beyond to recover... even after the darkspawn were all driven back underground.[3]

The Grey Wardens had Adamant Fortress erected by the dwarves to stand watch over the chasm. The region however became a stark and sad place with unstable purple sands looted with desolate rocky pillars engulfed in steep ridges. At night, the air grows still and the sky is alight with shimmering auroras— the time when darkspawn still come out of hiding.[4]

The Orlesians at one point had iron towers built, over a hundred feet high, to mark a path in the badlands allowing for travelers to see the next when one is reached. The towers, now old, rusted and barely visible no longer pave a clear path to Adamant Fortress which stands on the lip of the chasm towering at the end of the path.[5] Adamant eventually lay vacant by the Wardens due to the ever encroaching sands and intense howling winds.

The desolate badlands known as the Western Approach are as massive as they are barren. Bordered to the west by steps and crawling with monsters, The Approach is a place from which few explorers return and most avoid. The Grey Warden Fortress Adamant sits on the edge of a great chasm on The Approach's southern reaches, one of the few remaining signs that the greatest battles of the second Blight were fought here.

During the main quest Here Lies the Abyss, the Inquisitor sets out to follow the tracks of the disappearing Grey Wardens. After meeting Hawke in Skyhold, and being introduced to their Grey Warden ally in Crestwood, the Inquisitor learns that the Wardens have been gathering in a Tevinter tower in The Western Approach. While tracking down the Wardens, wildlife, White Claw Raiders, and Venatori will present a variety of threats amidst the sandy dunes, rocky outcrops, old Warden outposts and ancient Tevinter ruins.

When the Inquisitor finally catches up to the Grey Wardens, who are intent on performing a ritual that will help them eliminate the remaining Old Gods, they discover that Warden Commander Clarel is unwittingly being led into a Venatori trap by Magister Livius Erimond. Erimond is in fact a member of the Venatori and a servant of Corypheus who intends to bing the Warden mages to Corypheus' service. The Inquisitor can gain access to The Approach by completing the Investigate the Western Approach war table scouting operation in Skyhold.

Further investigation reveals that the Venatori are trying to access the Still Ruins, the site of an ancient Tevinter magical experiment, and capture the Abyssal High Dragon, a task which requires them keeping Professor Frederic of Serault alive. There is also evidence that the Red Templars have recently abandoned their mining efforts and relocated to Emprise du Lion.

Note: The 25 regions below make up the Regions in the Approach collection. Discovering all of them grants 200 Influence.

A Manuscript of Some Authority

A Stranger Rift in the Ruins

How to Lure a Dragon

On the Chantry Trail

The Heart of the Still Ruins

Rifts in the Canyons

Rifts in Sand and Dust

Rifts off the Pass

Code Requisition in the Approach

Fauna Requisition in the Approach

Lazurite Survey in the Approach

Luster Survey in the Approach

Deal with the Angry Varghests

Find the Source of Darkspawn

Secure a Source of Water for Outpost

West Hill Brandy - search the top of the tower directly above the Astrarium cave; climb the southern half of the east rubble slope and then traverse up the ladder.

Landmarks in the Approach

Freed Are Slaves (piece #8) - found in the Still Ruins, in the locked room, just to the right of the first hall encountered.

Shards in the Approach

Grey Warden Banner - found in a chest at the second siege point, where Hawke is encountered in Adamant Fortress; see main quest Here Lies the Abyss.

Tevinter Banner - found in a chest located in a room off of the left side of the Main Chamber of the Still Ruins.
Note: Requires Deft Hands, Fine Tools Inquisition perk.

Vandal Aria (only found in Coracavus)

Fire Rune Schematic - acquired in the cave revealed from unlocking Astrariums in the Approach.

Frost Rune Schematic - in a small cave accessible from the center of Echoback Fort.

Aegis of the Order - looted from within the same cave as the Thing in the Dark landmark.
Note: Requires the completion of the war table operation Crossing the Sulphur Pits.

Blizzard's Path - looted from a chest in Echoback Fort; see side quest The Trouble with Darkspawn.

Cowl of the Overseer - looted from Macrinus; see side quest Assault on Griffon Wing Keep.

Griffon Plate - acquired in the cave revealed from Astrariums in the Approach.
Note: Trespasser required.

Master Corrupting Rune Schematic - looted from a chest in Echoback Fort; see side quest The Trouble with Darkspawn.

Masterwork Enchanter Mail - acquired in the cave revealed from unlocking Astrariums in the Approach.

Masterwork Vanguard Mail - looted from a chest at the top of Shimmer Stone Mine.

Sad Splinters - looted after destroying the keep gate during the side quest Assault on Griffon Wing Keep.

Tempest - looted from the Inner Sanctum of the Still Ruins; see side side quest A Stranger Rift in the Ruins.

Codex entry: The Creation of a Phylactery

Codex entry: Our Lady of the Anderfels

A Letter Found on a Grey Warden Mage

Note from a Templar

Inscription Upon a Trebuchet Stone 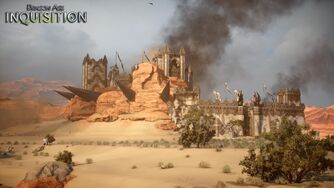 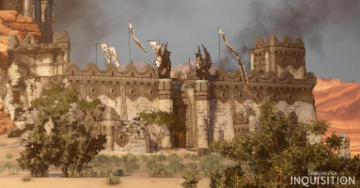 Another view of Adamant fortress 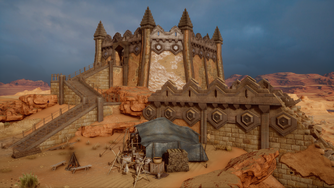 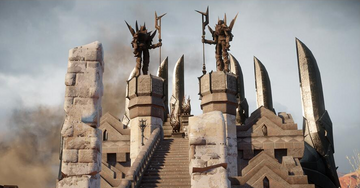 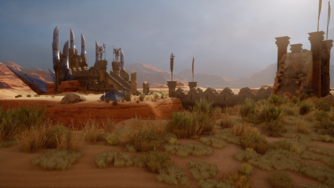 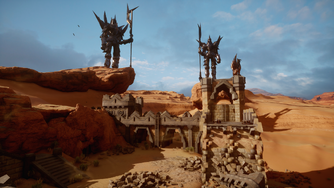 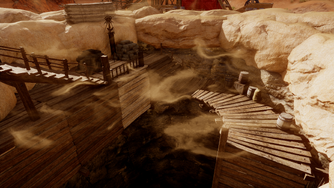 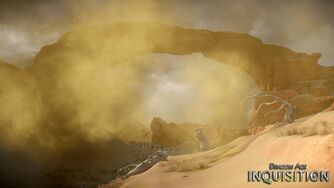 Poisonous gas from the Sulphur Pits