For weapons in other games, see Weapons (Origins) and Weapons (Dragon Age II). 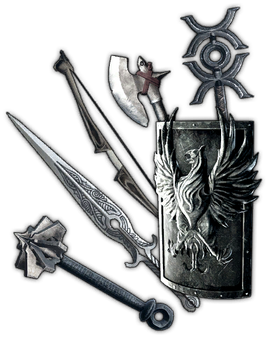 Weapons in Dragon Age: Inquisition are the basis for combat in the game. They can either be found in the world, received as a reward for quests and war table operations, or crafted.

If found, weapons will be either common, uncommon, rare, or unique. common and uncommon icons will be grey, rare will be blue, and unique icons are purple. Forged weapons have a yellow icon.

Weapons no longer require attributes to wield, instead they require players to reach a certain level.

Weapons use in Inquisition are quite different from the rest of the series. Combat has been slowed from Dragon Age II and is no longer "hack and slash." The player no longer automatically targets opponents, instead they must lock on manually. The tactical camera is now available on all platforms. Weapons are still class restricted, though the player has greater freedom in choosing follower weapons. Followers are no longer restricted to just one type of weapon.

To craft weapons the Inquisitor must find weapon schematics and enough crafting materials required to create the desired schematic. Once the Inquisitor has obtained the materials, s/he can then travel to a location with a known crafting forge. There, schematics can be viewed listing the required materials for weapon construction.

Once a weapon has been found or forged it can be upgraded with runes, grips, hafts, etc. This is done by crafting the accessory and then interacting with an anvil marked "modify weapons." There, one can change out one-handed weapon grips and hafts; two-handed weapon grips, hafts and pommels; stave grips and blades; bow grips and finally Bianca arms, aiming modules and grips. Take note that some weapons cannot be modified, there will be no additional slot available for upgrades; however, all weapons have a slot available for runes. If a rune is inserted, it can only be replaced, removal is not an option, the former rune will then be destroyed in the process.

Retrieved from "https://dragonage.fandom.com/wiki/Weapons_(Inquisition)?oldid=813810"
Community content is available under CC-BY-SA unless otherwise noted.