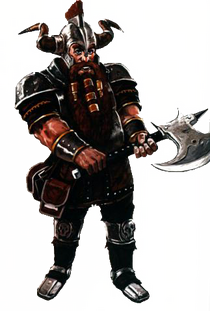 The Warrior caste is the caste of dwarven society predominantly concerned with defending Orzammar's borders and serving various martial functions.

The Warrior caste is one of the most important in the complex dwarven caste system, as they serve many functions and are therefore in great demand. It is also one of the most populous castes.

The lot of a Warrior caste dwarf is bleak, as they pay the price for Orzammar's security in blood and lost lives. Warriors lead disciplined lives of drill and practice and marry early, in light of their typically short life-span. They are also notably stoic in public so as not to bring dishonor upon themselves or the houses they serve. Nevertheless, they feel great pride and honor in their duties, and there are many benefits to being a warrior in Orzammar. Each Warrior caste house is sworn to a noble house--even the smallest noble house retains a few warriors. The more important the noble house, the more highly regarded is the warrior attached to it. Many noble houses have been founded by successful and powerful Warrior caste dwarves.

Paragon Aeducan is considered to be the most famous warrior.[2] Even though he never sought status or recognition he rose into prominence in the beginning of the First Blight by rallying the dwarven empire's defences against the darkspawn horde and saving his race from annihilation.[3]

Women have a special role in the Warrior caste, expected not only to fight as warriors but to produce children to bolster the numbers of the Warrior houses. Many women become battlefield medics and some undertake an even more extreme devotion to their duties by becoming Silent Sisters in honor of Astyth the Grey, the first female Paragon of the Warrior caste.[4][5][6]

Warrior caste members are also the usual combatants of the Provings in which they test their mettle in battle as well as show their skills to the rest of the dwarven society.

The Warrior caste contains specialized sub-castes: Officer, Soldier, and Guardsman. These sub-castes are the result of certain houses typically producing officers, soldiers, bodyguards, law-enforcers, etc. In modern day, however, much of the importance of these sub-castes has been put aside in favor of the overall defense of Orzammar.[7]

Warrior houses are frequently assigned by the Assembly to plan and lead campaigns into the Deep Roads. Those houses assigned to the task appoint officers from those Warrior houses sworn to them.[6]

The finest of the high-ranked warriors may become knights. Their form of address is "Ser", however this does not make them part of the noble caste.[8] The known dwarves who carry this title are the following:

A unique battle specialization amongst Warrior caste dwarves is that of the Berserker, a technique that allows warriors to fight vigorously and cause a great deal of damage by harnessing their rage in combat. This specialization has been taught to other races, most notably the Ash Warriors, who have adapted it to allow them to fight in tandem with their Mabari war hounds.

Warrior houses are listed in an alphabetical order and those whose status is unknown have their name italicized.