“For those who value survival, sentimentality is not an option.”

Vivienne is an Orlesian mage and personal enchanter and adviser to Empress Celene. She is a potential companion to the Inquisitor in Dragon Age: Inquisition and can be unlocked through the quest The Imperial Enchanter.

Vivienne's parents were both merchants from Dairsmuid in Rivain,[1] though she herself was born in Wycome in the Free Marches.[2] She was taken to the Ostwick Circle at a very young age, where she became one of the youngest full-fledged mages in Circle history. She was transferred to the Montsimmard Circle at the age of nineteen. She was already an exceptional scholar and showed early promise at the Game. In a shocking move, she elected not to join any Fraternity when she became a fully-fledged enchanter.[3]

At the Imperial Wintersend Ball of 9:16 Dragon, mages from the White Spire and the Montsimmard Circle were invited to attend the festivities and entertain the court. Vivienne was among the envoys from Montsimmard. There, she caught the attention of Duke Bastien de Ghislain, who spent all evening dancing only with her, slighting a number of powerful nobles in the process. Bastien paid her a visit in Montsimmard just a few days later, accompanied by a small army of florists bearing armloads of peonies. In short order, he invited Vivienne to several parties held at his estate, and by the start of summer she had a suite of rooms in his house from which she conducted most of her Circle business.

Their relationship caused a huge scandal at the time because of Vivienne's status as a mage. Several bards were sent to make an example out of her; half of them were returned to their employers frozen solid while she persuaded the rest to work for her instead. The nobility continued to stew in their opposition until 9:20, when the newly crowned Empress Celene chose Vivienne as her court enchanter after a single meeting with her.[4] While the position had always been regarded as little more than being a glorified court jester, Vivienne managed to turn it into an advisory position to the Empress despite the official ban prohibiting mages from holding political power. Nearly every fraternity clamored for her favor in hopes of having a representative at the empress' ear.

Her reputation kept growing after becoming Court Enchanter, and she was eventually given the moniker Madame de Fer, the Lady of Iron, a name that indicated her place as both a respected and feared member of the court. She was voted First Enchanter of Montsimmard at an age young enough to cause scandal.[3] Vivienne is also a connoisseur of fashion and was dubbed "the jewel of the high court of Orlais."[5]

After the Circles revolted Vivienne became the de facto leader of the Loyalists when she rallied those who took up arms against the mage rebels.[6]

Vivienne is briefly mentioned by Empress Celene, who considers speaking to "Madame de Fer" about Lady Cosinne de Montsimmard's familiarity with the Circle of Magi.

When the Inquisitor first arrives in Val Royeaux to deal with the Chantry, Vivienne extends them an invitation to her salon at the Ghislain Estate of her lover Duke Bastien de Ghislain. At the party, Vivienne intervenes when Marquis Alphonse openly disparages the Inquisition and attempts to challenge the Inquisitor, magically immobilizing him and leaving his fate up to the Inquisitor. As she sees the Inquisition as the only group willing to stand against the chaos and wishes to have a hand in deciding her fate, Vivienne offers to join the Inquisition. Banter with Cole later reveals that Vivienne manipulated the marquis into attacking the Inquisition at her party, which allowed her to move against him in response to a vicious insult he had previously dealt her.

Note: Vivienne must be recruited before starting Wicked Eyes and Wicked Hearts, as the option will no longer be available afterwards.

Vivienne is extremely bitter and resentful at what she perceives as the selfish actions of the rebel mages. In her mind, they see only their own oppression and fail to consider the well-being of others outside the Circle of Magi, as well as the justifiably increased fear of magic in the populace and ranks of the Templar Order, a fear that she believes is now, by their actions and that of the Kirkwall Rebellion, greater than it ever was since the rise of the Tevinter Imperium. She believes that the Circles and Templar Order must be restored to ensure the continued protection of both mages and ordinary people, and thus supports Cassandra Pentaghast as the new Divine over Leliana. Despite Vivienne's preference for Cassandra, Vivienne notes to the Inquisitor that Cassandra's lack of charisma is a serious fault in her leadership abilities. The Inquisitor can mention that mages like Vivienne should be more active in Chantry politics, and that Vivienne herself may make a good Divine - to which Vivienne responds positively.

In Skyhold, if her approval is high, she will offer to take the Inquisitor to Val Royeaux to meet with her own seamstress, as she believes the Inquisitor's image to be an important part of their power.

If her approval is low, however, Vivienne will have movers rearrange all of the Inquisitor's furniture in Skyhold. She claims that she was needling the Inquisitor to test their limits but she also expresses her disapproval at how the Inquisitor allows the mage rebel "malcontents" loose on the population unchecked.

During her personal quest, Vivienne asks the Inquisitor to bring her the heart of a snowy wyvern. Should the Inquisitor procure this item, Vivienne uses it to create a potion for Duke Bastien, who is suffering from an incurable disease, but he passes away regardless. If the Inquisitor gives her the heart of a common wyvern instead, Vivienne will unknowingly attempt the potion, causing Duke Bastien an uneasy death. She will later reveal that she is aware that the Inquisitor tricked her. After Bastien's death, Vivienne arranges for his son and sister, influential members of the Imperial Court and Chantry, respectively, to visit Skyhold. If her approval with the Inquisitor is high, Vivienne then gifts them a ring she commissioned from the Formari, noting that it was once customary for Circles to craft enchantments for their staunchest friends and allies.

It is possible to have Vivienne elected as the new Divine, after Justinia V. If chosen, she will be known as Divine Victoria. She is the first mage to hold the position and once appointed, the uproar is immediate. Three revolts follow in quick succession, and her response is immediate and vicious. Chaos reigned for months but eventually subsided. To the surprise of many, she reinstates the Circle of Magi and creates a Templar Order firmly leashed to her hand. Mages rise quickly in the new Circle, having more freedom and responsibility then ever before - even if all true power lies with her. Her reign is contentious and the Chantry could either accept her reign despite her detractors' displeasure or begin to fracture.[7]

Vivienne reappears during the events of the Exalted Council, two years after Corypheus' defeat. She appears either as herself or as Divine Victoria.

If the Inquisitor is friends with Vivienne:
Vivienne treats the Inquisitor to a "spa day". The two relax and catch up in a spa Vivienne likes to frequent while Sera causes mischief in the background.

If Vivienne was not elected Divine...
If the mages were allied with and Cassandra became Divine:
The Circles are rebuilt and Vivienne is elected Grand Enchanter. The College of Enchanters leaders are spared only as a favor to Divine Victoria.

If the mages were allied with and Leliana became Divine:
The end of the Inquisition sent shock waves through the College of Enchanters. Madame de Fer ably played on the mages' fears. Her followers united to build a new Circle—with Vivienne as the Grand Enchanter—in direct competition with the College. What the Circle lacked in numbers, they made up in political connections and became a force to be reckoned with.

If the mages were conscripted and Cassandra became Divine:
The College of the Bright Hand floundered as a result of the Inquisition no longer being the power it had been. Grand Enchanter Vivienne succeeded in pushing it to the margins of Circle politics, and its leaders reforged it as the College of Enchanters, breaking away from the Circle.

If the mages were conscripted and Leliana became Divine:
The Inquisition's mages that once served it as the Bright Hand were left to take up civilian lives. Some joined the re-established Circle of Magi under Grand Enchanter Vivienne's guidance. Others formed the College of Enchanters—a secular institution seeking opportunities for mages across the South.

If the Templars were recruited and Cassandra became Divine:
Vivienne is elected Grand Enchanter of the Circle of Magi, but her inauguration was not as triumphant as she had hoped. The veteran mages of the Inquisition who did not return to the fold formed a new College of Enchanters as a rival organization to her Circle.

If the Templars were recruited and Leliana became Divine:
The Inquisition's end as it once had been left its few mages with nowhere to go. Vivienne led many of them to form a new Circle with her as Grand Enchanter. The remaining veteran mages formed the College of Enchanters as a rival organization. The two groups settle into an uneasy coexistence in which they vie for power.

If Vivienne was elected Divine...
As Divine Victoria, Vivienne sits on the Exalted Council representing the Chantry. The first year of Vivienne's reign is tumultuous and polarizing. Cassandra considers Vivienne a tyrant while Vivienne's supporters say that her domineering leadership is what the Chantry needs. Cassandra states she will never agree with that notion. Nevertheless, Mother Giselle notes that at the very least, she has proven that the mages are under her control.

The Exalted Council continues to exist and advise her; Cassandra serves on the Council as well. However, Cassandra later becomes disgusted with Vivienne's perversion of the Chant of Light's intent to suit her whims and leaves.

If the mages were conscripted and the Inquisition is disbanded:
The Inquisition's conscripted mages wish to reform the College of Enchanters, despite Vivienne crushing them soon after becoming Divine, sending many retreating to the Inquisition. This time, secure in her hold over both the rebuilt Circles and the Sunburst Throne, she grudgingly allows them to live as a show of respect to the Inquisition that was. The two organizations settle into a barely peaceful coexistence over the next few years.

Truth or Dare: See and Be Seen (war table)

Vivienne favours a return to the old order of the Chantry and Circles. She detests the violence that has come with the mage rebellion and is scornful of radical change. As a result, she likes those who support the Circle system and scorn the mage rebels. Despite her approval of the Circle system, however, Vivienne is ambivalent towards the templars. She will slightly approve of actions that support the Templar Order, but she will also approve of negative or distrusting remarks the Inquisitor makes about them.

Vivienne is fond of politics and appreciates an Inquisitor who plays The Grand Game well, either by maintaining a polite facade or by noticing and pointing out hidden motivations in others, including in Vivienne herself. As a player of the Game, she knows the value of cultivating an image and approves of an Inquisitor who puts care into how they appear to others. She will disapprove if the Inquisitor ignores her advice or rejects the Game.

A Letter to an Ambassador 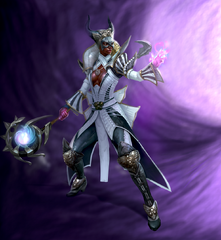 Official art of Vivienne in Heroes of Dragon Age 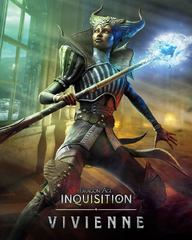 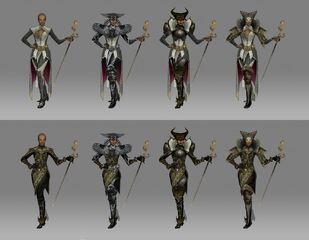 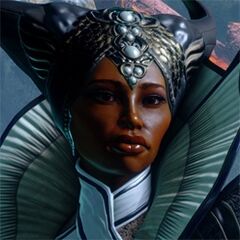 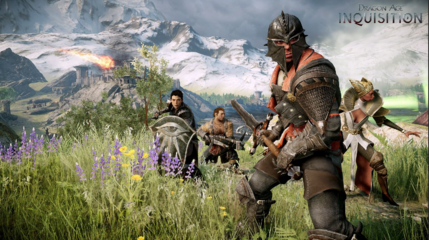 A profile view of Vivienne (far right) from the 2013 PAX conference demo. 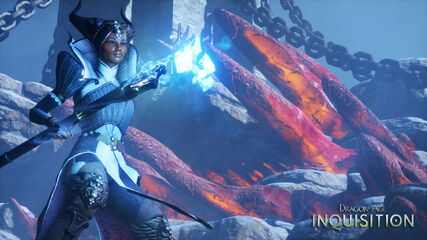 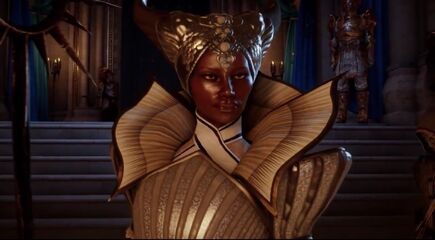 Vivienne in the Stand Together trailer

Tier progression of Vivienne in Heroes of Dragon Age