The Vinsomer is one of the ten high dragons encountered in Dragon Age: Inquisition. It is found on the Storm Coast. The Inquisitor's party will first encounter her by the beach, west of the Blades of Hessarian camp, while fighting a giant. The Vinsomer will leave that area if the giant dies or the Inquisitor gets close enough to the battle.

Later in the game, she can be found on Dragon Island, northwest of the storm coast. In order to reach Dragon Island, you must first acquire and complete the war table operation Red Templars on the Storm Coast. You will then get the Red Water quest, which will open the locked dwarven ruin door in the southwest area of the Storm Coast. At the end of the ruins, the Inquisitor's party can take a boat to Dragon Island.

According to legend, an especially large Vinsomer was the last dragon felled by the hand of Caspar Pentaghast. In Nevarran poetry, its breath alone caused thunderstorms and its wings formed hurricanes. Modern Vinsomer no longer grow to the same length, but are wary, dangerous and usually prefer isolated, high and rocky coasts.[1]

The Vinsomer breathes electricity, dealing electric damage. Accordingly, she’s resistant to electric damage but vulnerable to spirit damage. She is immune to almost all status effects; the one notable exception is poison, which will damage her.

All dragon attacks deal high amounts of damage and may inflict status effects with certain attacks. The Vinsomer uses the following attacks and abilities:

Ideally, your party should have the following set-up:

Two mages, each with the following abilities:

One warrior, with the following abilities:

Your choice of fourth party member.

Note: If your fourth party member is a rogue, they should have the Evade ability.

It goes without saying that you will need to have decent equipment to stand a chance against any dragon, particularly on higher difficulties. However, there are some types of equipment that will give you a better chance against this particular dragon:

If possible, you should have the Inquisition perks "More healing potions" (Forces) and "Tempered glass flasks" (Inquisition) to expand the number of potions your party members can carry. The following potions/tonics/grenades are strongly recommended:

If you have any spare potion slots and/or you don't have access to one or more of the above potions, these may work as alternates:

The biggest problem with this battle is the combination of the Berserk attack and the occasional full guard bar she’ll generate. The guard bar will extend the fight and the Berserk attack can't be dodged, which will wear down your resources. Otherwise, this is a fairly straightforward battle.

Turn off the barrier spell in tactics for one of your mages and keep control of that mage as much as possible during the battle. This will allow you to refresh your party’s barrier just as it fades, while the other mage’s barrier spell is cooling down, while it also prevents the AI from casting both barrier spells at once. This means you can keep up a barrier for most of the battle, if not all of it. Only switch away from your chosen mage when you need to take control of another party member to use Combat Roll, Fade Step or Evade to dodge an attack.

Focusing on her head will occasionally interrupt her attacks while she shakes her head and stops attacking for a couple of seconds, buying you precious time. This is a good tactic to take if you are having trouble with the damage she deals out – particularly the Berserk attack, which cannot be avoided. However, focussing on her head will lead your melee attackers away from her flanks and into the line of her breath and bite attacks, plus it gives up any chance of making her collapse.

Focusing on her legs, on the other hand, will eventually make her collapse on the ground for a short time, unable to move. This makes her a great target for ground-based multi-hit abilities such as Mark of the Rift or Firestorm. In order to do this, you should target one of her legs and command your whole party to attack that leg. After you have dealt enough damage to it, she will flinch and jump away, knocking nearby party members over. You know her leg is damaged enough when it starts bleeding profusely. At that point, you should switch to a different leg and repeat the process until that leg is bleeding as well.

Once all four legs are damaged enough, she will collapse to the ground a short time after (the collapse is not immediate). However, dealing enough damage to all of the legs takes a very long time, almost to the end of the battle, and you may not be able to make her collapse before she dies. If you do manage to make her collapse, however, she will be close to death - hit her with everything you’ve got and if you’re lucky you’ll kill her before she recovers. 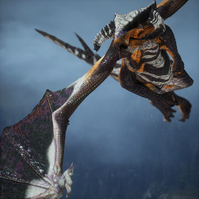 Vinsomer flying just off the coast 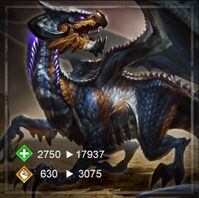