For the Region, see Crestwood.

The Village of Crestwood is located north of Lake Calenhad, lying between Val Royeaux and Denerim. The village's primary income stems from trade between Ferelden and Orlais.

King Brandel erected Caer Bronach in 8:26 Blessed, intending the fort as a stopover garrison for Fereldan soldiers fighting Orlesian invaders. The village of Crestwood takes its name from the fort's first captain Ser Venar Crestwood, who held Caer Bronach longer than anyone thought possible against a vanguard of the Orlesian army. Impressed by Ser Crestwood's tenacity and endurance, the remaining officers left the small village around the fort untouched as the Orlesians made for the capital, sparing hundreds of innocent lives.[1]

Crestwood is a small village of no real consequence to the lords and ladies who ride through on their way to Val Royeaux or Denerim. The people are glad for visitors; residents tend livestock and grow what crops they can, but their chief income comes from trade.[2]

Three Trout Pond hides a sinkhole hundreds of yards deep. Darkspawn emerged from this and other caves to attack Crestwood during the Blight. The flood that wiped out Old Crestwood drowned the blighted ones, and the excess water created the pond we see today.[3]

This section contains spoilers for:
Dragon Age: Inquisition.
A Fade rift opens underneath the nearby lake that enveloped the ruins of Old Crestwood which were destroyed during the events surrounding the Fifth Blight.[4] This results in Demons possessing the drowned Corpses residing in the ruins; the residents of Crestwood Village find themselves under constant threat from the undead.

Freed Are Slaves (piece #5) - found south of the village in the Hidden Cave, off of Old Market Road. 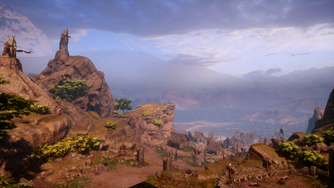 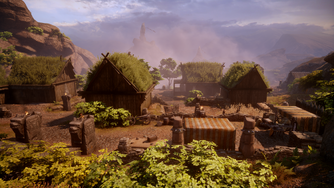 Crestwood village during the day 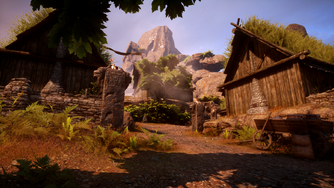