Villa Maurel is the estate of Lord Ramond Maurel, situated in the Emerald Graves in the Dales of Orlais.

Due to the War of the Lions, Lord Maurel abandons the Villa for the safety of Val Royeaux. The Villa then is taken over by the Freemen of the Dales, whom are deserters of the Orlesian Imperial Army, and is currently serving as their headquarters.

The operations being carried out by the Freemen of the Dales in Villa Maurel, unbeknownst to them, are in servitude of the Elder One. The Freemen are being manipulated by the Venatori and the Red Templars of whom are both actively progressing the Elder One's sinister agenda. After clashing with Costeau, a corrupt Chantry sister (operating out of the Veridium Mine), and Auguste, a former Chevalier and the current leader of the Freemen (operating out of Argon's Lodge), the Inquisitor sets out to investigate Villa Maurel and confront another of the Freemen's leaders, General Maliphant.

Freemen of the Dales
Red Templars

Invasion (piece #7) - found in the Personal Store Room adjacent to the Study; a warrior is required to break down the wall to access the area.

Orlesian Banner Crown - looted from the safe located inside the Vault; see side quest Safe Keeping.

Andraste's Sacrifice - looted from a chest in the Study.
Note: Requires installation of Patch 10.

Red Templar Note - looted from a Red Templars inside Villa; see side quests A Corrupt General and Victims of War.

Red Templar Orders - looted from a Red Templars inside the Villa; see side quests A Corrupt General and Victims of War.

Sigil of the Chevalier - found in a chest in the Vault; see side quest Safe Keeping.

Codex entry: The Exalted March of the Dales

Codex entry: The Long Walk to Halamshiral (see bugs below)

A Letter to Maliphant 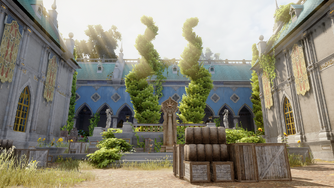 Looted from freemen after Maliphant's death
Add a photo to this gallery
Retrieved from "https://dragonage.fandom.com/wiki/Villa_Maurel?oldid=889391"
Community content is available under CC-BY-SA unless otherwise noted.