Vigil's Keep, informally known as the Vigil, is an ancient fortress in the Arling of Amaranthine, in north-east Ferelden. It was formerly the seat of the Howe family and is now the Grey Wardens' main base in Ferelden.

Vigil's Keep is one of the oldest settlements in Ferelden, older than Denerim and Gwaren. The barbarians who battled the Tevinter Imperium chose this location for a fortress so that their warning fires would be visible at great distance, when Tevinter ships neared the coast.

The fortress was built by Alamarri Avvars to stop the Tevinter advance from the North. In their time it was known as the Fort of a Thousand Vigils. It was built over caves leading to the Deep Roads, believed to be carved as a gift from Korth, an Avvarian god of mountains.

The Avvars residing in the fortress lived peacefully with the dwarves, which was unusual as the dwarves were allied with their enemy, the Tevinters. The alliance of Avvars and dwarves predates building the fortress. The dwarves helped the Avvars defeat and bind a dangerous shade called the Dark Theurge, who was previously one of their own, Ruadan.

As the Avvar culture declined, the ownership of the keep changed, eventually becoming the property of the Fereldan noble Howe family from which they governed the entire Arling of Amaranthine.

Vigil's Keep was the first fortress to fall during the Orlesian invasion in Ferelden and the last to be liberated during the Fereldan Rebellion. It is probably also the place where Prince Maric Theirin met Byron Howe in order to thank him for his support of the rebellion.

In 9:31 Dragon, after Arl Rendon Howe disgraced his family during the Fifth Blight, the Howes were stripped of all their holdings, including Vigil's Keep. The keep itself was then run by Fereldan soldiers. The last soldier to be in charge of the keep was Lieutenant Gable. The stronghold became a temporary base for Orlesian Grey Wardens who were helping Ferelden in the aftermath of the Blight, killing darkspawn stragglers.

In the month of Ferventis of the same year,[1] the keep was officially given to the Grey Wardens by the Fereldan monarchy along with the rest of the Arling. The Warden-Commander was appointed to re-establish the Grey Wardens presence in Ferelden, using Vigil's Keep as the order's main base.

The keep was assaulted by the Architect's disciples who either killed or kidnapped all of the Grey Wardens stationed there. It was a surprise attack on the day the keep was to be officially handed over to the Warden-Commander. The darkspawn entered the keep from a Deep Roads entrance located in the basement. The Deep Roads run deep underneath the keep.

If the Warden-Commander decides to save Amaranthine instead of Vigil's Keep, it is destroyed by the Mother's invading darkspawn army. Depending on player choices, the Keep may be rebuilt completely within five years. If the Warden-Commander decides to protect the Vigil, instead, their victory during the siege becomes one of the most important and famous military victories in the history of the Grey Warden Order.[2]

If the Warden-Commander invested in silverite armor for the Vigil's soldiers, they eventually come to be known as the Silver Order. Under the tutelage of the Wardens, the Silver Order developed into one of Ferelden's most revered military forces, a lasting memory of the Vigil's famous commander.
This section contains spoilers for:
Dragon Age: Last Flight.

The plot follows BioWare's own canon, meaning it may not follow some of the player's choices in the games.
During the Mage-Templar War there is a new Warden-Commander in Vigil's Keep. They request supplies from Weisshaupt after an encounter with sylvans.[3]

The Survivors of Vigil's Keep

It Comes From Beneath

What is Built Endures

The Siege of Vigil's Keep

The Keep can be upgraded in the following ways.

The following have the largest effect on the ending:

Recruiting merchants for the quest Trade Must Flow allows for new items to be available for purchase:

Lucrosian's Silken Cord - source: from a locked chest during the Assault on Vigil's Keep.

Stormchaser Helm - source: from a locked chest during the Assault on Vigil's Keep.

Codex entry: Vassals and their Liege 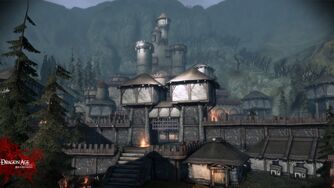 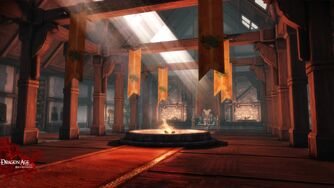 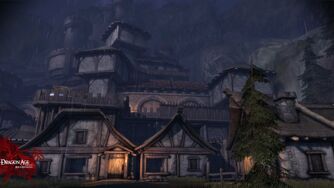 One of the keep's buildings 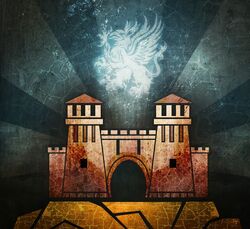