“All people with power never fail to abuse it, even those with good intentions.”

Velanna is a Dalish elf mage and a potential companion in Dragon Age: Origins - Awakening.

Velanna was a quiet child who struggled to understand social interaction, and spent her time obsessively studying Elven history. This was in sharp contrast to her sister Seranni, who was two years her junior. Seranni was a cheerful and popular child who often attempted to include Velanna when she played with her friends. Velanna always failed to understand both the point of playing games and how to interact with her peers, and faced constant rejection.

Seranni's friends eventually stopped allowing Velanna to play with them. Velanna was devastated at the rejection, and she began to delve deeper and deeper into her studies. Her magic manifested when she was nine years old. She had long dreamed of being a mage, as she thought it would tie her further to the ancient elves, and when she finally produced a single flame in her hand, she immediately brought it to Keeper Ilshae and proclaimed that she would be the Keeper's First. Ilshae was impressed by Velanna's boldness and agreed. Ilshae nurtured Velanna's love of Elven history and in-time became like a second mother to her.[1]

When some humans attempted to burn Velanna's clan out of the woods to prevent them from reaching their farms, Velanna was outraged and demanded revenge for their murder attempt, but Ilshae forbade it. Velanna called the Keeper a coward and was exiled. She left to seek vengeance on the humans with a handful of other elves and her sister, Seranni. The elves were attacked and killed, save Velanna herself and Seranni, who was seemingly taken captive. Believing the human merchant caravans traveling between the capital of the Arling of Amaranthine and Denerim to be responsible for the deaths of her comrades, Velanna begins using her magic to assault the caravans and their guards.

Once fully appraised of the situation, Velanna asks the Warden-Commander to join them in hunting down the darkspawn responsible for her sister's abduction in hopes of rescuing her. Together they track the darkspawn to the nearby Silverite Mine where they are captured by The Architect and imprisoned in its Laboratory. Velanna and the Wardens are freed from their cell by Seranni, now infected with the darkspawn taint, before she mysteriously vanishes. Together the party slay the gathered darkspawn; however before they can kill it, the Architect escapes to the Deep Roads collapsing the passage behind it. Realizing that only Grey Warden training will grant her the abilities to track down the Architect and thus have any hope of rescuing her sister, Velanna offers to pledge herself to the order, in exchange for their unique powers. Velanna subsequently survives the Joining and becomes a full fledged Grey Warden.

Once her approval becomes high enough, Velanna will encounter a group of Dalish hunters from her clan, led by Maren. Velanna learns from them that Ilshae has passed on and this prompts Velanna to later reveal the circumstances that led to her leaving her clan to the Warden-Commander.

If Velanna is among the Warden squadron that attacks Drake's Fall, Seranni will be encountered one more time. Seranni and Velanna briefly discuss the similarities between the Architect's darkspawn and the Dalish before Seranni vanishes again, leaving Velanna bewildered.

Note: In Awakening, epilogue slides are also affected by whether or not the relevant companion quests were completed and how high companions approval has been raised.

Velanna favours items of elven heritage and objects that are her favourite color - green. Special dialogue can be obtained through befriending her and giving her a blank journal.

As you befriend Velanna and gain her approval, she will gain the following additional skills:

Below are the spots where you can initiate dialogue with Velanna. On the PC, it can be hard to find the correct spot to click; make sure to hit "tab" and rotate the camera if it's not letting you click on it.

(When talking about Keenan) 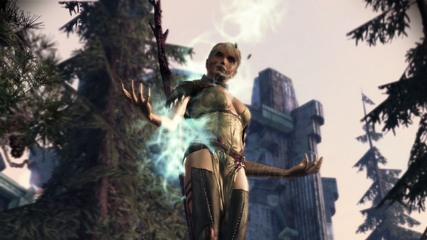 Encountering Velanna in the Wending Wood 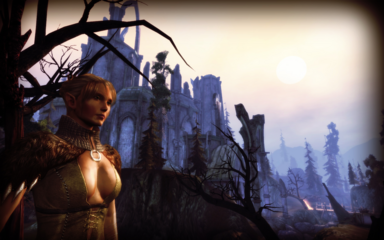 Artwork of Velanna's tier progression in Heroes of Dragon Age

Tier progression of Velanna in Heroes of Dragon Age