On consoles, Veil Quartz can be farmed by using a variation of the chest exploit.

Veil Quartz can also be farmed from the sealed rifts in the Basin. When looting the rift remains, simply leave one item. Travel to another location in Thedas and then return to the Basin. The loot in the pile will be replenished. Although this technique can be used with any rift pile that has more than one item, the piles in the Basin are much richer and always include veil quartz. Also, this is one farming method that works on all platforms, including PC. 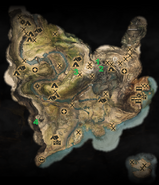 Map of the Veil Quartz deposits around Frostback Basin.

Fourth Veil Quartz deposit.
Add a photo to this gallery
Retrieved from "https://dragonage.fandom.com/wiki/Veil_Quartz?oldid=867639"
Community content is available under CC-BY-SA unless otherwise noted.