Edit
watch 02:19
Wiki Targeted (Games)
Do you like this video?
Play Sound
“It is said they were rock and tree, wind and rain, given form and breath by the elven gods to protect their people.”―Ariane
“Spirit born of wood and stone and air, you were created to protect those now dead. You have failed in your duty.”―Lienne

A varterral is a huge spider-like creature that stands on five massive legs and can move at a surprising speed.

According to the Dalish, the first varterral was created in the days before Arlathan. A high dragon attacked a mountain city beloved by Dirthamen, and the elven god fashioned the fallen trees of the forest into a deadly guardian that drove back the serpent.[1][2][3] Elves tell that the varterral has kept its vigil ever since, even over the ruins.[1] They also say that if magically[4] bound to guard something, a varterral will stay alive no matter how many times it is defeated,[2][3][5] a lot like a golem.[4]

Varterrals thrive in secluded places and hunt elk and bears.[3] They have a rocky carapace, attack with fast strikes and spit caustic poison.[2][3][4] At least some of them have no eyes and thus are completely blind, which is offset by the ability to feel movements through the ground like a snake and, according to Felassan, to taste the guilt of intruders.[4] Only dragons represent a challenge to the beasts, and even they seldom win.[3]

In theory, varterrals should never attack an elf, whom they discern by the scent, save in self-defense.[4] Yet the creatures encountered so far lashed out at anyone regardless of the race.

A varterral attacks the Warden-Commander, Ariane & Finn in the Dragonbone Wastes. Its presence comes as a complete surprise to them, though it presumably has something to do with the eluvian hidden deep beneath the Wastes.

Another varterral makes its Hunting Ground in Sundermount. It had taken the lives of three Dalish hunters and Pol before it was struck down by Hawke and Merrill in 9:34 Dragon. Three years later the creature revived and attacked Hawke's party again when they returned while hunting for an Antivan assassin.

Grand Duke Gaspard de Chalons and Empress Celene's parties, under a temporary truce, combat a varterral that exists to guard the central eluvian activation chamber with a pedestal surrounded by a labyrinth of runes on the floor.

In Search of Morrigan

A Murder of Crows 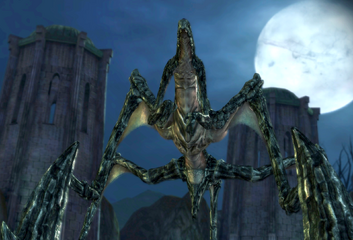 A varterral from the Destiny trailer 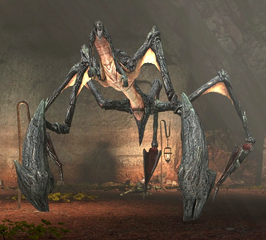 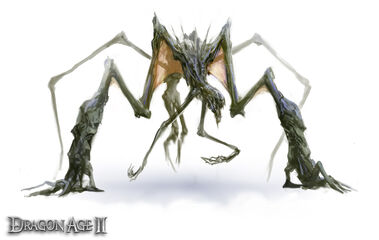 Bioware character art of a varterral[6]

Tier progression of a Varterral in Heroes of Dragon Age 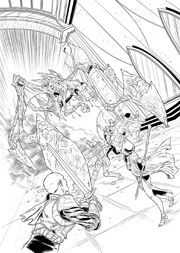 Varterral in The Masked Empire