When the children of our people came of age, they earn the privilege of wearing the vallaslin, the blood writing. It sets us apart from the shemlen, and from the elves who have thrown their lot in with them. It reminds us that we will never again surrender our traditions and beliefs.

Vallaslin, sometimes referred to as blood writing, is what the Dalish call the intricate facial tattoos worn by all adult clan members. The ink used to do so is considered sacred. Many young Dalish receive their vallaslin when they are around 18 years of age[1] or younger.[2] When a Dalish elf comes of age, they prepare to gain the vallaslin by meditating on the gods and the ways of the Dalish, and by purifying the body and the skin. When the time comes, the Keeper of the clan applies the blood writing. This is done in complete silence. Cries of pain are taken as signs of weakness. If a young elf cannot tolerate the pain of the blood writing, they are deemed unready to undertake the responsibilities of an adult. The keeper may stop the ritual if they decide that the one gaining the vallaslin is not ready. Blood writing is at least in part a religious practice, and there are different designs representing deities in the Elven Pantheon. There is no design for Fen'Harel.

Worshippers of the Forgotten Ones were seen wearing brilliant crimson vallaslin.[3]

The use of vallaslin during the time of Elvhenan is a much more controversial concept than believed by the Dalish. In the days of Arlathan, the tattoos were not signs of patronage to the various elven gods but, in fact, slave markings--signs of ownership--when noble elves enslaved the lower classes; they were representations of the gods that the nobles favored.[4] Abelas and the Sentinels of the Temple of Mythal have vallaslin dedicated to Mythal etched on their faces.

Through cultural reappropriation, vallaslin is now something entirely different for the Dalish, who utilize the markings as something positive for their people.

A text on the carved tablet found in the Temple of Mythal tells of "the eventual failing" of elven markings.[5]

This section contains spoilers for:
Trespasser.
During the time of Elvhenan, the rebel god Fen'Harel, who was opposed to the practice of slavery, called fleeing elven slaves to him and lifted their vallaslin with magic, to break the bonds of the Evanuris who oppressed them.

Thus far, three groups of Dalish have been encountered: those of the Dalish Elf Origin, those of Zathrian's clan in Nature of the Beast, and the ones found in the Exalted Plains in Dragon Age: Inquisition. Various designs of blood writing can be seen on their faces. There appear to be eight main designs, each of which comes in a simpler and a more complex version. Though similar to the main eight there are two unique designs that are used by Velanna/Seranni in Dragon Age: Origins - Awakening and Merrill in Dragon Age II.

Junar, a hunter in the clan of the Dalish Elf Origin (simple version)

Fenarel, a young hunter in the clan of the Dalish Elf origin (complex version) 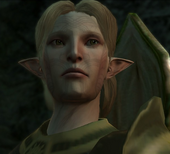 Fenarel as he appears in Dragon Age 2 (complex version) 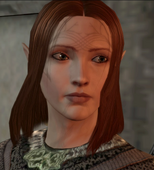 Ashalle, an elf in the clan of the Dalish Elf origin (simple version)

A Dalish Messenger (complex version)
Add a photo to this gallery 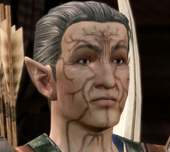 Maren, keeper of the halla in the clan of the Dalish Elf Origin (complex version)
Add a photo to this gallery 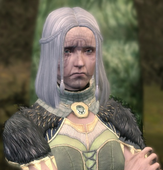 Aneirin, a healer and former apprentice of Wynne's (complex version) 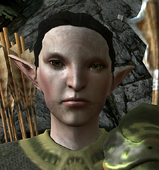 Harshal, a hunter of the Sabrae clan (simple version)
Add a photo to this gallery

Tamlen, a friend of The Warden of Dalish Elf Origin (simple version) 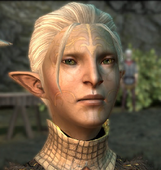 Mithra, a hunter and occasional guard in Zathrian's clan (complex version)
Add a photo to this gallery

Paivel, a storyteller in the clan of the Dalish Elf Origin (complex version) 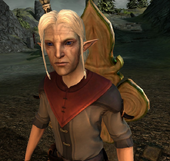 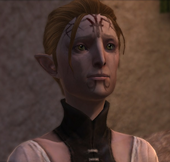 Variel, a member of the Dalish Warden's clan, only in Dragon Age II (complex version)

a Dalish assassin, the daughter of Danyla
Add a photo to this gallery 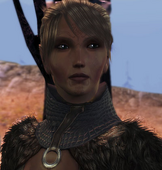 Merrill, a potential companion in Dragon Age II (design is similar to design 8 from Origins, though notably different and not used by any other characters)
Add a photo to this gallery

The designs found in Dragon Age: Inquisition and their corresponding deities are pictured below.[6]

Sylaise (simple version)
Add a photo to this gallery

Retrieved from "https://dragonage.fandom.com/wiki/Vallaslin?oldid=810027"
Community content is available under CC-BY-SA unless otherwise noted.