In ancient times the dwarves used the region as a trading post until it fell to the darkspawn horde.[1] The uppermost layer of the soil has since collapsed, leaving the surface exposed, allowing for a massive waterfall to form. The built up humidity from the water has allowed trees and other flora to flourish about the region.

Architecturally, Valammar is very similar to Orzammar in the sense that the settlement is designed in a series of tiers.[2] The thaig lay docile beneath the Hinterlands unbeknownst to those above. Darkspawn roam freely undisturbed ―until the Carta's sudden interest in the abandoned fissure.

“It's extremely surprising to find such a high quantity of the product this close to the surface. If I didn't know better, I'd think it was growing.”―carta smuggler

Bianca Davri discovers red lyrium growing about the connecting mines to Valammar. She deduces that red lyrium is a byproduct of lyrium infused with Darkspawn taint, and quickly realizes that the dangers far outweigh its potential. The risk associated with the spread of its corruption motivates Bianca to eagerly seek out anyone with knowledge on the matter. Bianca's connections allow for her to make contact with an unknown Grey Warden Mage.

At this point either Larius or Janeka, (depending on whom Hawke allied with whilst navigating the Legacy DLC for Dragon Age II), crosses paths with Bianca masquerading as the Grey Warden Mage. Larius/ Janeka subconsciously discloses to Bianca that they are able to safely handle the red lyrium conning Bianca to provide them with the key and exact location to the red lyrium caches. Bianca, unaware that the Warden Mage is in fact an ancient corrupted magister, reaches out to Varric Tethras with a possible lead for Corypheus' red lyrium source.

During the events of the Mage-Templar War outbreak, the mine location and key were passed along to Carta dwarves via the Elder One's interceding. They realized that the thaig would provide a lucrative source of income by mining the lyrium at the source rather than smuggle it in from Orzammar, which involved way too many intermediaries, and thus produced much smaller profit margins.[3]

Without having to work with the old families back in Orzammar, or even take this through official guild channels, our families stand to make a killing. On the other hand, the proximity to the surface and to the populated areas of Redcliffe raises an interesting challenge. The war between the mages and templars should keep people out of the area for now, but as soon as the humans are done trying to kill each other, any operation we start will be uncovered. Talk to the families and make it happen. This is too good to pass up.[4]

In addition to the current discord ravaging the Hinterlands, via the violence and onslaught produced between the Mages and Templars, mercenaries are hired to further destabilize the region ―pillaging refugees and raiding nearby settlements allowing for mining operations to continue in secrecy.[5][6]

We hired your mercenary organization to facilitate this business venture, not add complications. In order for the Carta to extract the product without attracting unwanted attention, the area must be free from observation. The fighting between the apostate mages and the renegade templars must remain unaltered; your efforts now are to dissuade refugees from exploring the area and prevent interference with our operation.[7]

We don't need any heroes on this operation. We're being paid to keep things quiet and keep trade away from "The East Road". When reasonable, allow targets to flee and spread word of the danger in the area. When such is unreasonable, kill all targets, regardless of colors flown.[8]

However, despite the Carta's best efforts to secure the thaig, the numbers needed to do so were in-vain due to the constant threat of Darkspawn swarming about in the dark on the lower levels. The over-looming threat of Darkspawn encroaching on the upper levels via the vast interconnecting chasms kept the Carta on edge,[9] forcing them to barricade off most of the area including multiple connecting bridges to the Primeval Thaig.[10]

Acting on a tip from Davri, Varric informs the Inquisitor of the dangers stirring in Valammar. Bianca discloses that the location of Bartrand's Folly has been leaked, and that the Carta are using Valammar as a smuggling front. Varric imparts the he provided Bianca with the thaig's location from a letter he sent her post returning from an expedition with his brother Bartrand in Dragon Age II. The Warden Mage, whom successfully dispatched either of the high ranking Wardens, Larius or Janeka, preceding the events from the Legacy DLC, is finally reveled and an undertaking is set with an agenda to eliminate the Carta's presence in Valammar permanently shutting down the red lyrium excavations. To access Valammar the Valammar Key is required. The key can be obtained on an overlook in the Grand Forest Villa during the side quest The Mercenary Fortress.

Note: If side quest Well, Shit is active, Bianca will have already traveled to Valammar and unlocked the door allowing for entry to the area. The side quest Deep Trouble can still be completed once the Valammar Key has been acquired from the Grand Forest Villa. However, initiating and completing the aforementioned quests out of their intended order will prevent the side quest The Mercenary Fortress from being completed.

The Fall (piece #2) - found inside a locked room located in the Halls of the Elders (head across the bridge after encountering two Carta members scuffling with a Darkspawn).

Dwarven Banner - looted from a container in The Vaults, or obtained from The Canyon Tomb in the Hissing Wastes.

Bianca Arms III - found in a chest located in The Vaults.

Pitch Grenade Recipe - in a chest found behind the "bashable wall" located on the Upper Terrace.

Personal Note Scrawled in a Ledger

Report on Activity in the Hinterlands 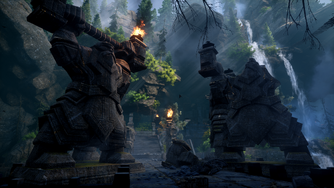 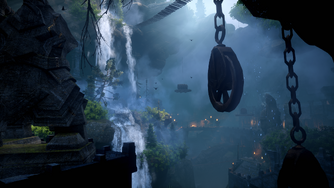 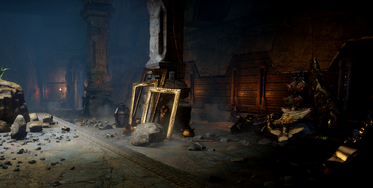 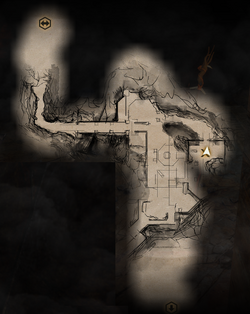 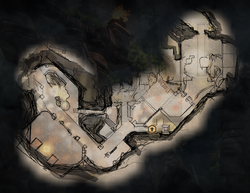 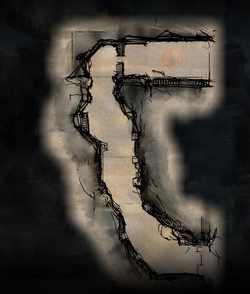