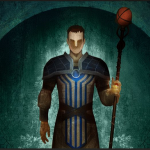 Hi, welcome to the Dragon Age Wiki! Thanks for joining! I hope that you will stick around and continue to help us improve the wiki. Please leave a message on my talk page if I can help with anything! -- Loleil (Talk) 12:18, 1 November 2011

Per DA:CONDUCT, please avoid resorting to personal attacks to other users. This is in regards to your comment to an unregistered user, calling them "Adolf". Regardless of your feelings on this matter, the comparison is not warranted. ···

Hello. :) I saw that you thanked me for your profile format, and I wanted to say that I do not deserve thanks. I am certain that the format is one that I saw someone else using, and I adopted it. My profile has a few minor variations, but that is all. I've been looking through my earliest edits as I think the person who first used it was a regular editor here, but I can't find them. I'll keep looking, and if I do find them, I will let you know. I'm sorry for not making it clear before that no credit is due to me. -Sophia (talk) 22:01, December 12, 2013 (UTC)

Well do inform me should you ever come accross it, but as the idea was not my own I can't very well take all the credit for it! however if you're requesting that i remove your name from it I will. Warden Mage: Ferris (talk) 22:24, December 12, 2013 (UTC)

Hello there! I was wondering if you could take a particular in-game screenshot of HoDA. It's for wiki use of course.

Well, the Dwarven Carta area in the quest section of the game uses as a symbol something like this. Could you take a screenshot of this symbol (it is preferred to be as large as possible) and upload the screenshot in imgur.com or in any other image hosting site? This symbol will represent the dwarven race around the wiki.

Will do! My device is a smaller Samsung, but the screen shots for this game still appear kinda big (but it seems to lose resolution a bit) however I have a second account on a Kindle with a much larger screen so whichever has the better image I'll get to ya. Warden Mage: Ferris (talk) 15:13, January 27, 2014 (UTC)

Hey there! Do you have Sigrun by any chance in your party? Her page is missing a HoDA-related picture of her. Cheers!

I've just noticed that there is an epic version of Oghren. Do you know where I could find an image of him? Thanks!

Unfortunately that one eluded me (Tho not for lack of trying, I really wanted one!) I can (and will) ask the official forums, and get one of the other players to provide a screen shot! Warden Mage: Ferris (talk) 12:52, February 17, 2014 (UTC)

Hey, sorry for bothering you again, but do you have a picture of an inferno golem? I do own it as well, but I cannot take screenshots on my phone for some reason. Thanks!

Hello again Ferris! I hope you're doing well! I'd like to ask for a few extra characters. As far as I know there are two version of Legionnaire units and two dwarven soldiers in HodA (Dwarven Warrior and Dwarven Rogue). Could you provide these four pictures please? Thanks in advance!

Hello hello! Always good to hear from you. I have images of the common/uncommon units i just never uploaded them I can get them to you by the end of the day. Warden Mage: Ferris (talk) 13:01, February 28, 2014 (UTC)

Damn, Wikia is experiencing issues again. Been trying for hours to upload the pics but it does not let me. By the way can you share a HoDA image of the Ancient rock wraith? Will upload all of them together when the wiki allows me. Just noticed that Bartrand Tethras makes an appearance as well. Is he released on a new pack or he existed for some time now?

Yeah I've been seeing an increase in issues lately, hope everything is going ok. Some of the newer one I havn't picked up yet, to be honest I didnt even know Bartrand was available yet, but upon looking at the gallery for who they added I'm missing a great bunch. Including the Ancient rock wraith, I guess they also added Xebenkeck, reanimated Leandra (really? o.0) some new abominations, and I'm on Android OS so I never got Slave fenris. But I have picked up a Yavana, if you need her image. Warden Mage: Ferris (talk) 04:27, March 2, 2014 (UTC)

I want a full team of Reanimated Leandras! xD

Anyway, I have managed to upload the pictures. As for Yavana, we already have a picture of her. Could you send one for the "Corrupted spider"? It's uncommon I think.

Strange, I know the Spider was my first big creature but it's not in my gallery just yet. I know you had mentioned not knowing how to take screen shots on your device, if you tell em what device it is I could prolly tell ya how. It's literally my daily job doing mass tech support for all smart devices. Warden Mage: Ferris (talk) 15:42, March 3, 2014 (UTC)

I googled how to take ss. I read that I had to press two buttons in my Android in order to print screen but it didn't work...

hello WMferris i'm the original poster for : what is a blood-mage ? when i wrote this i did'nt mean for it to become a full-fledge intelectual battle-ground ( and some part of me is sorry i ever did ) still even though i did not read the entirety of it ( novel length is right ! ) i think that it as evolve in an unanticipated direction and became something more then the original question, anyway my point is that you and the other poster ( sorry at the time i'm writing this i've forgoten the login name of the other guy ) should work together ( and maybe clean it up a little bit ) to make a proper article on the meaning of blood-magic ( in all context moral, etical, cultural and psychological with it's various analogie in the real world ! ) maybe you could togther send a copy to bioware to show them what kind of fire of though ( said in a good way ) they're spark created ! feel free to answer me either here or on my talk page ok ! DragonInquisitor (talk) 14:56, May 18, 2014 (UTC)

thank you for your response ferris ( i hope you wont mind the shortened name ) but while i dont want to forbid you from doing anything on your own profil i was think more along the line of a standardized article to be put ( found ? ) in the lore section of this site so that any visitor even those who dont know who you are could access it ! DragonInquisitor (talk) 15:56, May 20, 2014 (UTC)

let me ask you a question ferris : are you a philosopher or a psychologist ? because even when we have a polar oposit stance on a subject it remain fun to talk ( or should i say write ) with you, you alway remain polite and your argument really give one a lot of food for though ( more like in the energy drink category ) and they never sound like a conceited and obnoxious individual ( like somes that i will not name ) you never defend yourself or your point by insulting or belittleling others and for that i thank you ! ( it's peoples like you that make coming back to this wiki time and again fun ! ) DragonInquisitor (talk) 19:08, June 3, 2014 (UTC)

i would not have named him first but since you did let me ask you a question about him : is firstdrellspecter some kind of masochist ? frome the various source i know he is not generaly well liked so why do he come back ( i mean he even stoop so low as to use socks puppets loge in to continius arasing peoples is he a troll in human form ? )DragonInquisitor (talk) 21:03, June 3, 2014 (UTC)

In case you own the character... Edit

Hey Ferris! Please check this discussion in case you could help us out. Cheers!

i think that the title pretty much says it all ! you see in my next D.A.2 playtrough i intend to play an evil hawk ( warrior 2 Hander ) who for that playtrough specificly will support the templar ( i did say he was evil ) so that's why ( and because i've never tryed it in any of my other playtrough ) i'd like to pursue a rivalry-based romance in this case with merril ( i alway succeed in my friendship-based romance but never attempted a rivalry-based one and i'm a little bit unsure ) i would welcome any advice on the mather and if you dont have one then maybe you can point me toward peoples who know in either case thank you in advance ! DragonInquisitor (talk) 20:17, June 19, 2014 (UTC)

i assume i would've to do something along those line the part i'm unsure is that when you choose a more confrontational path ( in other word when you pisse her off ) will the heart-shaped option to "woo" her ( or any other compagnion with wich we have a rivalry-based ongoing romance for that mather ) remain available ? ( btw i dont know if you know already but i know a sure fire way to pisse her off ( merril ) royaly : there is a quest during act2 in wich you have to hunt down the location of five blood-magic books when you find them among several option you can destroy these books and if you do while merril is in your party you get a whooping +10 rivalry per book destroyed that can lead to +60 rivalry ( all 5 books plus the fell grimoire )) DragonInquisitor (talk) 00:42, June 20, 2014 (UTC)

Hey Ferris! I am searching for some HoDA pictures of characters/creatures which the wiki does not have yet. If you could find some of those I'd be really grateful! If you can't for some, please share with me some ideas on how to find them. These are:

hey ferris i would like to have your opinion on my latest posting ( CRAZY THEORY : IS SANDHAL THE MAKER ? ) i wish i could create a direct link from this page to my post anyway your opinion would be most welcome ! ( no mather what you think on the subject ! ) DragonInquisitor (talk) 19:23, June 29, 2014 (UTC)

I was wondering if I could trouble you for some screens of your Grey Warden Mage IV from various angles?

I assume this is from DragonInquisitor, but I'm not totally sure, but I can try and get some better pictures of the gray warden mage if you like. Warden Mage: Ferris (talk) 20:58, July 14, 2014 (UTC)

Per your recommendation, I moved my request in the HoDA forums. There is some quick interest already and hopefully it will persist the coming days. I would like to ask you to help me keep the thread alive and obviously you're welcome to post images as well. Cheers!

Oh and I just sent you an ally request in HoDA

I couldn't resist the temptation so I attacked you in HoDA :( I'm really sorry.

Retrieved from "https://dragonage.fandom.com/wiki/User_talk:Warden_Mage:_Ferris?oldid=619747"
Community content is available under CC-BY-SA unless otherwise noted.