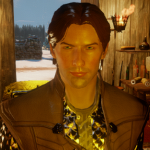 Hi, welcome to the Dragon Age Wiki! Thanks for joining! I hope that you will stick around and continue to help us improve the wiki. Please leave a message on my talk page if I can help with anything! -- D-day (Talk) 12:19, 3 June 2012

If you remember your argument with Jaeha the other day, I saved a log and revised it since it happened. While his role in the argument will not go unnoticed, I have warned you previously that any form of racist comments would be followed by a ban. A few have expressed in the past that they are disturbed by such comments, and even though I warned you about it, you did it nevertheless. This ban will last 3 days from now on, and if such behavior will persist in the future, the length of the next ban will be even longer. I hope you will take your time to think about this a bit so when you'll come back, this won't have to happen again. --

May I have a copy of that argument, so I can see these "racist" comments that I made? As I was not the only one in the argument that made such comments, I hope the punishment is just between both parties involved. --Verkone (talk) 22:08, August 19, 2014 (UTC)

While of course I could provide you a log if you want, I'm not sure what it would yield as you were present just as much as Jaeha who was pointing out the statements that were problematic. If you're asking for logs from the past, sadly I don't have a whole library of every incident. This case might not have been the worst compared to the past comments, but you know that I was giving you a chance by warning you.
Again, I can send you the log if you'd like, just let me know where. --

Well since I want to respond to the message you just deleted, I'd rather restore it (even without that it could be found in the history anyway):

"I want to look them over, because I know that there was a false accusation. Jaeha misinterpreted some of my statements as racist when they really weren't. I just wanted to make a case for myself. You warned me after the conflict and told me not to do it again, so I feel shocked being banned two days after reconciling when I could have just been banned on the spot. But of course, everyone has their own definition of different words. You can leave the log on here if you prefer or a PM on social media. --Verkone (talk) 04:24, August 20, 2014 (UTC)"

So yeah, will do. Also, about the ban being done two days later, I needed time to take things under consideration - there's no time limit how long that may take (though a reasonable amount of time is what it should take), and in fact, some cases need time to think about them some more. As I said, this might not have been the worst case of all, but this was the last that happened. --

I am so mad! you had like 12 hours left! -Elvenfay

you have a week now, added from last night. i am glad you can edit your page, it said you where block for a month last night.—Preceding unsigned comment added by Elvenfay (talk • contribs)

As we consider sock puppetry such a serious offense I increased Margerard's one week chat block to a one month site wide block. Per our policy, your alternate account has been blocked indefinitely.

Retrieved from "https://dragonage.fandom.com/wiki/User_talk:Verkone?oldid=605345"
Community content is available under CC-BY-SA unless otherwise noted.