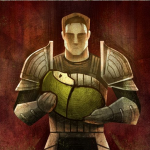 Hi, welcome to the Dragon Age Wiki! Thanks for joining! I hope that you will stick around and continue to help us improve the wiki. Please leave a message on my talk page if I can help with anything! -- King Cousland (Talk) 02:45, March 28, 2013

Hi, thanks for the recent images you've uploaded. I just wanted to make a small request that you name the image files something simple and easy for users to enter, rather than the string of digits and characters the file may be named by default when you first save it. Thanks again!

Hey star, loved your link and I am utterly grateful for it you awesome dude. But do you mind if I do a news article on it?

You claimed that Gwendoline may be voicing Vivienne, did they say this somewhere XD, thanks a lot

Please tell me who dies from our favorite characters in Last Flight? In PM please. I don't know how to do them.

Hey! Please credit the artist for this fanart that you posted [1]. They put a lot of time in their work and if you're going to post it without their permission at least credit it. Thanks! --Kelcat (talk) 00:47, August 11, 2014 (UTC)

Hey! Thought since you've been big on news lately and thus, you upload quite a few pictures, I would give you a helpful advice. When you upload a picture, please name it as something that helps people recognize it instead of random gibberish. I know it's not you naming the pictures as gibberish, of course, but renaming during upload would make things easier. For example, the one you uploaded last is named "10615618_10152608469064367_1101165563945140928_n.jpg" right now, which could've easily been something like "gamescom 2014 promotional.jpg". If possible, you could also set the license for them and categorize them. :) --

You can rename the pictures only before upload, otherwise you'd have to request them to be renamed. You can add the licensing before and after (easier before, along with the renaming), while categorizing is done easier after upload. --

More bits and bobs for you.

found this on twitter from a retweet by Mike Laidlaw. Think it'll be useful in a forum, yes? I am not good with these things, but you are a smart man and I am most certain you will find a good place to put this. Have a very merry day my friend and cheers! B.S.S.T. (talk) 04:41, August 27, 2014 (UTC)

It's Darion How are you? Edit

Hey I just wanted to let you know that I posted a new post on my Lord Couslands Dinner Party board in which I referanced your character in relation to the rest of the stuff happening. I did not alter anything about your character or make your character do anything. All I did was have Lord Cousland relize you had left and kept it to himself. I did however metion that our characters are friends, but we do differant things. I also put in their that we survived Ostagar together. Feel free to change anything in my post about your character if you like so it can better mach up with your head-cannon. I'm sorry if I changed things. I do not want to interfear with whatever you have planed it looks really good just like your first post was a treat to read. Also what do you think about my wrieing in general so far? What was it like to work at Dragon Con? I have always wanted to go there. (Darion Cousland (talk) 15:23, September 4, 2014 (UTC))

Brother it was great and i loved what you put I think im gonna put out a chapter a month if I can your doing a great job it was an awesome idea you actually helped me with the way to start it off so thank you very muchStar Metal Knight (talk) 00:13, September 5, 2014 (UTC)

How are doing Bro? I'm doing great myself. I know that you are asking for PSN accounts I still don't have on yet, but I'm working on it. I really want to multyplayer with you guys. It also unfortunatly looks like I won't be able to get DAI untill Christmass, and that really sucks cas I'll be behind everyone ealse. Well what you been up to lately? (Darion Cousland (talk) 18:20, October 13, 2014 (UTC))

Thanks SMK for the pics, they were lovely to see. I've removed them off my page now though as some people thought I was getting engaged lol. Hope you don't mind. --Xsari (Talk) 18:20, September 10, 2014 (GMT)

Were I you I'd stay close to the devs twitter and the Dragon Age Facebook group. Hopefully they'll give us something new. If not, there's always the Edmonton Expo on the 26th.

Hello! Per our Image Guidelines please try to limit the amount if non-Dragon Age related images you upload to the wiki. Many of the images you've uploaded here are not related to Dragon Age at all and don't really need to be uploaded. In the future, I'd suggest uploading them to an external image site and then just linking to them. Thanks! --♫ Kelcat Talk 00:27, September 14, 2014 (UTC)

fucking awesome loved it! i want to see more and different stuff lol you must feed my demon did you get a ps4 yet need ur playstation tag so i can add ya !Star Metal Knight (talk) 21:54, September 14, 2014 (UTC)

Heard you asking about PSN accounts on a few profiles. I have one as well but for PS3. Don't have a whole lot of games for it as my blu ray drive died on me and trying to find a way to fix it. Don't have a PS4 yet, not getting one for another year but getting an Xbox One soon. Not enough exclusves that interest me personally to warrant a purchase. Reply to me if you want my account name. Supergodzilla118 (talk) Supergodzilla118 22:09, September 14, 2014 (UTC)

That picture you just uploaded of Sera, where did you find it? Do you know if it's for Eurogamer Expo tomorrow or for Edmonton Expo on Friday?

Look what I brought you for christmas! ...Wait... I mean your birthday! Eh, same thing. Anyway Bioware is going to be streaming a new gameplay demo on the 29th at noon your time.

Here's the link to their twitch channel so you can watch it.

The panel should have started about twenty or so minutes ago. When it's over, where do you think we'll find the information and things they discussed? B.S.S.T. (talk) 18:37, September 28, 2014 (UTC)

Hello, I thought I should just remind you about which game image we use for characters depends on how significant their game is in each game. Feel free to add the Loghain image to the gallery. -

Retrieved from "https://dragonage.fandom.com/wiki/User_talk:Star_Metal_Knight?oldid=627291"
Community content is available under CC-BY-SA unless otherwise noted.