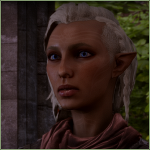 Hi there. Regarding the quests, I see you point. I wont add the war table operations then. Regarding Trespasser, kinda. My reasoning for adding it? Many others have done so on many other pages. And that haven't been reverted.

Fair enough! I hadn't noticed Trespasser being added on other pages - I understand wanting to be consistent. Personally I would still remove it for the reasons I gave on your talk page; let me know what you think.

I've left a note on the anon's talk page inviting them to discuss things here, so it's all in one place. For the anon's info, here's what I posted on Dajax02's talk page:

The ones I've reverted have mainly been where war table operations or non-companion quests have been listed as quests, or where Trespasser has been listed under appearances where Dragon Age: Inquisition is already included. I've done this because DLC for a particular game form part of the main game; basically you can't play Trespasser without already owning DAI, thus it's not separate from DAI and doesn't need its own listing. I've amended the "quests" section to only include quests directly related to that character as a companion because if we listed every quest where a character is tangentially related or made an appearance then we'd list every single quest in every game they're in, which would just be silly.

It's mostly based around all of it, such as Cullen for example. Listing The Inquisitor as his wife even if conditional shouldn't be listed, considering how I've seen on other pages such as Kieran his father isn't mentioned because of the player determined outcome of it, a similar thing is with Cullen, the quests (from what I know) are only for personal quests and not for quests said person was involved in. Affiliations are something I'm not a fan of, considering affiliations really refer to a group and not a person or country. 81.132.160.190 (talk) 18:56, February 2, 2016 (UTC)

I began doing it for two reasons: 1) I like that, in need of a better term, seems "complete" 2) The consistency that Mag mentioned. It's true, Kieran doesn't have his father named (he did though sometime ago though) but many other characters also has this kind of information (not added by me).
Really, it's just a small amount of additional info - it doesn't hurt anyone.
Regarding Trespasser: if you don't mind Mag (and if you don't revert it ofc) I might - might - add it here and there. Not really like its a major thing.
And [number guy]: that affiliations doesn't refer to a person or country is, to my knowledge, downright untrue. Dajax02 (talk) 20:17, February 2, 2016 (UTC)

Just to add my two cents here. Trespasser should be addedd to appearance only in those cases that a character or thing appears ONLY in Tresspasser. Like it is done, for example, with Tallis. It says Dragon Age 2 - The Mark of the Assassin.

I agree about the importance of consistency, but I'm concerned that the character infoboxes could become very bloated very quickly if we try to include all possibilities. There's a huge number, after all!

So far it looks like we have three issues to resolve (feel free to add any others you want to discuss):

My view is that romantic relationships shouldn't be included under family at all, except where a marriage is an immutable part of Bioware canon, e.g. Rowan being listed as King Maric's wife vs. Anora listed as Alistair's sister-in-law.

I agree with Henioo's point about Trespasser/DLC. Doing it this way helps cut down on bloating in articles, too.

If I may interject on a few points:

There are definitely articles that have things on them that they should not, so the fact that something is on a page doesn't always mean that it should be added to every other page. I'd invite any contributors to look over our Dragon Age Wiki:Manual of Style. ♫ Kelcat Talk 21:07, February 2, 2016 (UTC)

So what is the final judgement guys? If we take my edits: which of them are we including? And what reverts are we keeping? Can we agree on something like this:

And the conclusion regarding DLCs such as Trespasser? (My thoughts about adding DLCs to their appearences is if there are interactions with them exclusive to that DLC (such as with the Inner Circle characters in Trespasser)). Dajax02 (talk) 22:06, February 2, 2016 (UTC)

It is a little hard to reach consensus if none of the participants in this discussion are going to answer. Dajax02 (talk) 17:07, February 4, 2016 (UTC)

We've had a mod response from Kelcat clarifying the rules that were already in place, so I didn't reply because there's no further consensus to be reached. The only things I'd point out in your previous post are that Ferelden is a country and the Warden is a person therefore neither are valid affiliations, main quests are never solely about one character and so don't come under quests, and (again) DLCs should not be listed unless the character in question only appears in that DLC and not the main game (e.g. the Viddasala). Everything else looks okay. Hopefully that makes sense!  Magpieme talk | contribs   19:57, February 4, 2016 (UTC)

Retrieved from "https://dragonage.fandom.com/wiki/User_talk:Magpieme?oldid=770945"
Community content is available under CC-BY-SA unless otherwise noted.