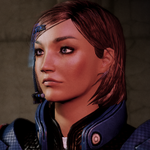 Hi, welcome to the Dragon Age Wiki! Thanks for your edit to the File:Inferno golem shell.png page.

I hope that you will stick around and continue to help us improve the wiki.

Posts. I was even happier to find out you're also female. Sounds weird probably, but I am weird. Just wanted to say that I always appreciate your contributions to a conversation. Oh yeah, +10 approval for FemShep pic. Xelestial (talk) 00:09, September 10, 2011 (UTC)

P.S. What's your certs for? I see you're a Sys Admin, Linux or Windows?

No, not weird at all! It's always a blast to find like minded females who don't think I'm weird for loving gaming and RPGs. I am also a fan of anime (loved Avatar!) and I've already pre-ordered SW:TOR and ME3. I do Windows, and dabble in Linux. I did not do the cert this spring though -_-' I've convinced myself that I'll wait until I've studied for the server and workstation certs then knock them out one after the other over the winter. I might even believe me if I say it enough times. How did you get to be a games journalist? That would be my dream job, right behind Disney animator. Legionnaire Scout *talk* 01:52, September 10, 2011 (UTC)

Same here to almost everything :D What particular cert were you going for?

Games journalist is a very underappreciated and extremely underpaid job, but the connections to the games industry are great and lead to other jobs... (I'm currently interviewing for a non-designer position at a certain awesome gaming company shh)

Anyway, I got to be a "paid" games journalist same way most people do: go volunteer at sites (can find jobs at places like videogamejournalismjobs.com or through gaming sites) and then keep your eyes and ears open for paid oppurtunities, and make some friends and network (Twitter and Linkedin is great for that).

Sadly the pay is crap unless you can get into the really big websites or magazines and even then it's still mediocre, staying at around 25-35k usually. Plus, every single website I've dealt with seemed to have people who would use writers and then throw them away. So TL;DR don't become a games journalist as anything but a stepping stone into the games industry.

Okay after you describe all that it sounds like you go through a lot of work to get work. :D I know only of a few game reviewers that have made a bit of a name for themselves, but it seems like you have to have a bit of luck in addition to talent and perseverance. Or make your own luck by networking! I met a lady online ages ago on an RPG BBS (to completely date myself) who went on to be a game reviewer and write walk throughs and guides. I believe she went about it the same way - Scorpia was the name she went by, though I don't think she works in the industry any more. Good luck on the interview!

I'm supposed to be refreshing my MCSE while doing my bachelor's degree, and with working full time I've got enough energy to get through the semester and finals, but by the end of the term the idea of studying for another exam leaves my brain curled up in a fetal position gibbering incoherently.

If I ever bothered to practice, that is, work at it regularly... daily - the only way to challenge yourself and improve - I'd improve my art skills. As it is, I just dabble. Yes, Disney has closed up all of their US animation shops, but I think they still have some overseas, but they are all about the 3D now. I love Pixar's work, but I miss the 2D work that made Disney famous. I think they are just following the money, but if the last few 2D films didn't gross as much as the 3D films, it's not the visuals at fault, but the writing which has suffered. The direct to video sequels in particular are dreck, lacking the normal Disney magic. Pity, that. Legionnaire Scout *talk* 04:23, September 10, 2011 (UTC)

Yeah, you do go through a lot of work to get work and then you get paid crappy generally and mistreated. You can get lucky or work hard basically, like you said, to end up like that lady Scorpia.

Yeah, reminds me of my husband cept he's mostly being lazy. He is working fulltime and supposed to be working on his CCNA. He's already taken it but he failed it while being very close to passing and he seems disinterested in it now - he just wants to relax when he gets home, you know? Not study. And I was working on my BA and working fulltime while trying to raise a 2 year old so that didn't work out so well. I think we as humans sometimes take on too much :S

I agree about the Disney thing, I love Pixar but I don't see why they blame the artstyle for the low sales. Kids are kids, they don't care too much whether things are 2D or 3D so long as they are entertaining. Let's not even talk about those Direct-to-DVD sequels ~.~

Anyway, one bad point of if I get the job, I will have to cut ties to the gaming industry as far as forums, wikis, and journalism, for at least as long as I have the job which sucks. I don't know what I'll do or what will happen right now, but I hope I can keep in contact with some of the great people I've met on this forum, like you :) Xelestial (talk) 15:13, September 10, 2011 (UTC)

Well, that is a bit of a drawback. But it makes sense, I suppose, that a company would want to control the sources of information about their titles and work in progress. I completely understand how your husband feels. It takes a bit of the wind out of your sails when you fail one of those things. I am dreading the Microsoft tests because they've changed them to be simply annoying more than challenging, and the questions seem to be more word games than a reflection of how well you use the product. No one in their right mind would follow Microsoft's advice on several administrative tasks, but you have to give an answer as if you would. But, I've passed them before, so I'll pass them again. They're just... vexing.

Ah-ha! Thank you - I didn't know you could do an include in the signature preferences field. I was wondering how to get the timestamp to appear correctly, and that fixes it nicely. I completely overlooked that page when I was trying to find help on customizing my sig. I found some basic instructions in general Wikipedia help, but it didn't go into using transformations to keep things neat and modular. This is a big help. +|| Legionnaire Scout -- talk ||+ 22:59, September 12, 2011 (UTC)

Regarding your wish to get a delete section, I think it's better to simply use Template:Cleanup. You may even simply remove the section too and list your reasons in the edit summary or talk page rather than nominating a section to be removed. --D. (talk · contr) 16:39, October 1, 2011 (UTC)

Retrieved from "https://dragonage.fandom.com/wiki/User_talk:LegionnaireScout?oldid=360703"
Community content is available under CC-BY-SA unless otherwise noted.