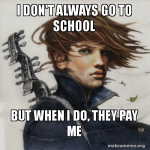 Hi, welcome to the Dragon Age Wiki! Thanks for joining! I hope that you will stick around and continue to help us improve the wiki. Please leave a message on my talk page if I can help with anything! -- D-day (Talk) 12:19, 30 January 2012

Would you not agree that Fiona's pretty much the only viable candidate for Alistair's mother? Read Maric's and Fiona's pages on the wiki, and read The Calling itself. It all but explicitly stated that she is Alistairs mother. Arctistor23 (talk) 00:44, February 27, 2012 (UTC)

Hey you never know, it might well be the very same rose. But I suppose I understand whta you're saying. But when it turns out to be true, I'll be saying: "I told your so!" :)

I know and Understand that it was a stupid question but it was truly just a question mention in jest, as just for my own odd and weird since of humor.--Charlie.look (talk) 17:32, March 4, 2012 (UTC)

Hey Gabrielle, you mentioned some time ago that you got DA2 for dirt-cheap (or something along those lines) and also got most of the DLC for free. I'm thinking I might try to get DA2 for PC (to play for shits and giggles, mostly); any tips to get all those tidbits in the same way you did? Thanks & Cheers EzzyD (talk) 14:34, March 14, 2012 (UTC)

I was curious if you've ever played Legacy or Journeys. I assumed the rods never appeared in those games when I wrote up the page. I am second guessing myself on that assumption now that I am bored and looking over my old articles. Mictlantecuhtli (talk) 16:30, June 26, 2012 (UTC)

Okay. I'll just remove her from the roster. We had enough warriors anyway. -

I was about to add some categories and also some extra stuff on that page, but I guess you were quicker than me! Thanks anyway ;) Yours,

I don't mind at all. Hope you had a good morning by the way :P

Hey Gab! I started typing an email to David Gaider about ideas and features which will be awesome to see in Dragon Age 3. If you have any ideas, you can share them with me in order to send them over to D.G.

Thanks for telling me. He's just earned himself an extended block.

Spotted it earlier, thanks

Sure, you can of course delete any inflammatory posts yourself they're clearly insulting or trollish.

Thank you for the edit on this new page of mine! I searched but hadn't seen it as coming up on the wiki when I created the page, and I apologize for the accidental duplication. Thanks for doublechecking it! :) WardenWade (talk) 16:42, July 30, 2012 (UTC)

Good news, the retyping took less time then I thought. Here's the link: http://dragonage.wikia.com/wiki/User:Isolationistmagi/Solaryn_1 I'll be putting it on her character page as well. ----Isolationistmagi 19:55, August 14, 2012 (UTC)

Thanks for converting my page into a forum. Don't be surprised if d-day (or D-day) starts a new forum that sounds similar to mine. I just found out what you did after I sent message about my predicament and gave my permission to start the forum.--KCMueller (talk) 02:57, November 29, 2012 (UTC)

Retrieved from "https://dragonage.fandom.com/wiki/User_talk:GabrielleduVent?oldid=470809"
Community content is available under CC-BY-SA unless otherwise noted.