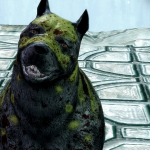 But you have to admit, it wasn't completely unimaginative …

Is there a reason you undid my clarification on dragon webbing being unavailable from the Black Emporium and the Merchant at the Winter Palace only unlocking when the Trespasser DLC is started?

Even EA doesn't have that info on their forums and it took me over an hour to figure out why I couldn't purchase them. That's why I wrote it for clarification....Rilriia (talk) 17:55, July 4, 2017 (UTC)

Hi hi, big fan. First time I read your u/n, I rolled with laughter. I had to edit in a bug for Redcliffe village on PS3, but now I can't remember the console tag. Can you help me? lmao.

Hi, Rilriia. Glad you like my humor.  :D To put a console tag on something, use the Platforms template {{Platforms|ps3}} which looks like ps3

Due to your regular (and great edits) Viktoria recommended you for rollback rights which you now have. This lets you immediately revert all edits that a vandal has med with one click. Please let me know if you have any questions.