There it is, fellow Thedosians. Out of the blue, BioWare have released a sneak preview of the the next installment of the Dragon Age series, for IGN's gamescom 2020. Unlike the previous video, this one is entirely devoted to the next Dragon Age, and it is chock full of concrete information, ranging from character names, voice actors, to concept art and behind the scenes of animation production.

In addition, the official website of https://www.dragonage.com has been updated, and a tag line was added, that reads "The world needs a new hero. Will you answer the call?". However, the website is not yet fully functional, and the link to "more updates" is currently broken.

You can watch the video here.

The video starts with Casey Hudson, the current general manager for BioWare, who previously worked on the original Mass Effect trilogy; introducing this sneak preview, and describes the game as still being in very early stages of production.

Mark Darrah goes on to promise that in the next game, we will visit places never shown before, and meet character who grew up in those places. Patrick Weekes adds that BioWare want to present a story in which the player doesn't have power, like the case was in the recent Inquisition, and partly in Origins and its add-on Awakening; and the characters who do have the power - are not doing anything to help. John Epler mentions that the story will focus people who surround you, your companions and family. Andre Garcia emphasises the choices in the game will matter, and Katrina Barkwell further drives the point home in saying that the player can decide which companion lives or dies.

Gareth David-Lloyd was confirmed to return as Solas, and can be seen voicing one of the lines, presumingly addressing the protagonist: "They call me the Dread Wolf. What will they call you, when this is over?"

Jee Young Han is said to voiceover the character of Bellara.

Ike Amadi will voiceover a Grey Warden by the name of Davrin. 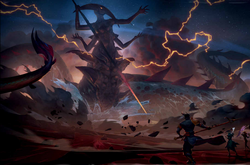 And some shots of work in progress:

And now for pure speculation by yours truly, what the images mean to me. Not that these are just my thoughts.

We'll be watching and rewatching this sneak peak for years to come, as the game is in early stages, and even more so with the pandemic. But nice of BioWare to give us all this concrete info instead of beating around the bush.