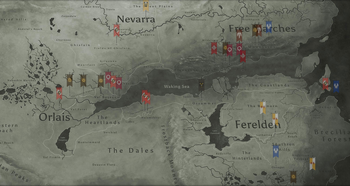 BioWare, following the release of the cover of the upcoming Dragon Age: Inquisition, as well as a new trailer, have updated the game's website.

One of the new features includes an interactive map of Thedas, and a short timeline of events, which includes the most important events for the story of the game, such us the founding of Inquisition, Chantry, and the Mage-Templar War.

The website is available in ten languages including English.

The website also presented us with various other information about the game, and that includes the specialisations available. They have been added to the wiki since then and are as follows:

Some were explained, but descriptions for others are still to come between now and the release of the game.

Retrieved from "https://dragonage.fandom.com/wiki/User_blog:Henio0/BioWare_updates_the_Dragon_Age_website_-_interactive_map_of_Thedas_%2B_confirmed_specializations?oldid=571027"
Community content is available under CC-BY-SA unless otherwise noted.