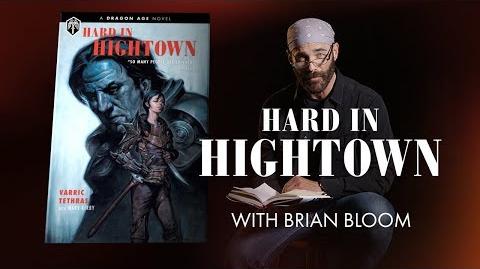 There is also an interview with Varric included below: Interviewer: Thank you so much for finding the time in your busy schedule for us; it’s truly an honor! And why don’t we just jump off from there: You’re an adventurer, known for your exploits alongside both the Champion of Kirkwall and the Inquisitor — you’re a best-selling writer — and you’re the Viscount of Kirkwall, a major trade city in the Free Marches with plenty of its own problems. How do you find time for it all?

Interviewer: That explains a lot of our scheduling difficulties ... But of course, we’re here to talk about Hard in Hightown, your breakout novel, which has outsold even Genitivi’s ubiquitous Travels of a Chantry Scholar. It’s not your only blockbuster hit, alongside The Tale of the Champion [an account of the life of Kirkwall’s controversial Champion] and All This Shit is Weird [a record of Ser Tethras’ travels with the Inquisition], both works of non-fiction. What does it mean to you that you may be remembered for Hightown more than those others?

VT: I’ve never thought fiction and non-fiction were all that far apart, really. Stories matter. True? False? Doesn’t make a difference. All that matters is that you tell them right. But I’m glad that Hard in Hightown seems to be my most popular book. Maybe it means people like searching for justice, whether they find it or not? Or maybe they just like to see city guards get the shit kicked out of them in print. Who knows? It annoys Aveline either way. Ser Tethras, in his author’s portrait from his romance series Swords and Shields.

VT: Nah, it’s easy to write humans. They’re pretty much dwarves, but with simpler politics. [Laughs] I’m kidding. Mostly. People just aren’t as different as they like to think they are. Humans, qunari, elves, dwarves? They all do the same shit for the same reasons. Or make variations on the same bad decisions. They just need different sized hats.

Interviewer: Ah, I’m being told we’re running out of time, [to Viscount Tethras’ seneschal] do we have time for just one more? […] Excellent. Ser Tethras, several employees in the offices who will remain nameless must know: Do you expect to return to the Swords and Shields series?

Retrieved from "https://dragonage.fandom.com/wiki/User_blog:HD3/Hard_in_Hightown_released!?oldid=810550"
Community content is available under CC-BY-SA unless otherwise noted.