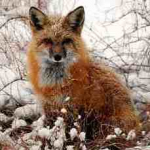 Alright... kind of silly to put up a blog and not say a couple of words about myself, so I guess I should rectify that. I'm Czech and English is both my hobby and my job, which probably gives me away as a teacher. Despite the common presumption, this does not mean that with the last bell, I crawl back into the crypt and hibernate till dawn; quite the contrary, this is when life really starts. I have tons of hobbies and interests I won't bother you with, as Dragon Age has been occupying most of my free time ever since the last summer, anyway, and being a passion of my life just next to Tolkien.

Due to the constant interference of real life, mostly my husband and son, I've managed only a single playthrough of the Origins, with my one and only Warden, Ned Cousland, who is also the helpless victim of my whim in the stories I post on the fanfiction.net (since my usual nick was already taken, I go there under Ygrain33). He is there in the best company, of Alistair, Nathaniel and Morrigan, occasionally also Wynne, and since he is a gentleman, he doesn't mind the infamous Catelyn Hawke, either. I've posted a couple of the shorter fics here on the blog, Lesser Evil, While the Candle Burns, Two Of Them and Of Shrews and Bitches; all of these and some more can be found at my ff.n profile .

I've decided to post more over here, even the long works, to pass the time waiting for DA3. His Father's Son is a full-length Awakening novel from Nathaniel's PoV, focusing mainly on the Cousland-Howe interaction. It is a work in progress and bloody the longest fic I've ever written, but I am fully confident that I'll make it. Only too late I realized that I should have started with something that gives more insight into the background, so that's why I've posted Necessary Things, as well, which provides a couple of crucial moments and characterisation of my Warden. It is a detailed around-Landsmeet story, with multiple PoVs - mostly Ned and Alistair, occasionally also Wynne, Cauthrien, Loghain and Anora. There are also three related stories, Seasoned Veterans (a little one-shot between Wynne and Riordan, 'cause not only the young and beautiful need some lovin'), Measures about dealing with some problems unsolved by the Landsmeet and Ashes and Embers, which is an account of RtO establishing a connection to the Landsmeet. Currently I'm posting Succumbing to Weakness, following the development of Ned's relationship with Morrigan, from her PoV.

Since I spend so much time with Ned Cousland, it might be a good idea to say a few words about him, as well.

First of all, the Ned I spent the playthrough with is not the same as described in the fics. When I was starting the playthrough, I knew nothing about the Couslands, so when I was creating his face, all I had in mind was an interesting-looking eye candy. It was only throughout the game that he started to gain some personality, and towards the Landsmeet I began to feel that some scenes were severely lacking in details, and Ned was virtually demanding a say. So, that's why I started to write, and been doing it ever since, because the more details I write, the more blank spots appear to be filled.

As those "missing scenes" were gaining shape, though, Ned's appearance began to change. First, he obtained dark hair, which seemed only logical, given Fergus' looks. Next, I considered incorporating the stats - since I was shamelessly nosing for spoilers from the very beginning, I maxed his cunning and coercion in a way that was rather inconsistent with his built as a sword-and-shield warrior. The default athletic in-game body did not fit with these, and that's how Ned of the silver tongue and a stature too slender for a typical warrior, came to existence. With the lighter build, it was only logical that his face would also display finer features, such as he could inherit from Eleanor, and this gave birth to a non-heroic-looking hero. The "(almost) cute" label which I added goes purely to me being a mean, mean author, bashing the hero stereotype even more. Besides, it was definitely more humiliating for Loghain to be bested by a mere "boy".

All in all, the above reasons and some time with the character creator resulted in an attempt to re-create Ned - given the limits of both the game and my skill, this is the best I've come up with so far. I admit I may have overdone it in the cuteness department, but I managed quite interesting changes throughout time. I'll probably try again later, but since there is no telling when I might get round to that, I'll post what I have for now: 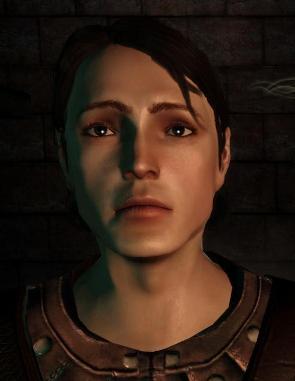 Ned "The Pup", some happy time before the Origins 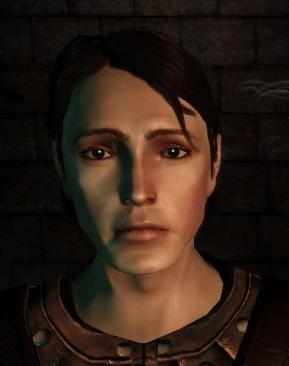 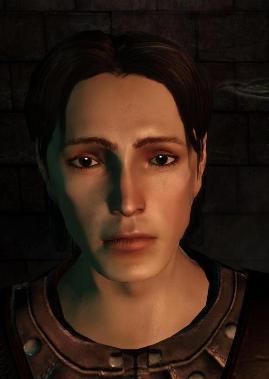 In the second half of the Origins, and at the beginning of the Awakening. Apparently, a good pal on the roads (and regular sex, most of the time) are a good antistress cure. The change of hairstyle because Morrigan likes it longer :-) Also, there will be a scar or two when - and if - I figure out how to add them. 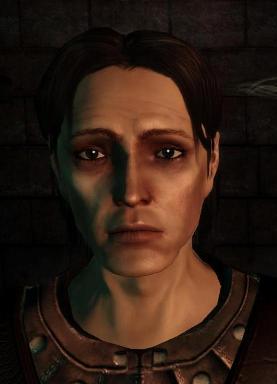 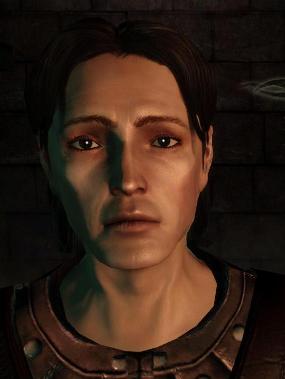 Towards the end of the Awakening 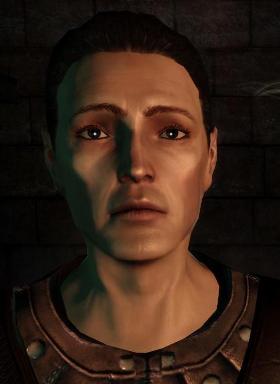 The Warden Commander Ned Cousland, the Arl of Amaranthine, at the beginning of Witch Hunt. Some more scars left to imagination.

Alistair: "Just so you know, if the king ever asks me to put on a dress and dance Remigold, I'm drawing a line, darkspawn or not."

Ned: "I'll get you some fancy stockings to go with the dress. You can trust my taste."

Cauthrien: "You must be either very bold or very stupid to threaten the Teyrn before witnesses!"

Ned: "Since when is justice considered a threat unless by those who have to fear it?"

Howe: "I didn't think you would be so stupid as to come down here."

Ned: "You know what? I hoped you would be so stupid as to wait down here for me."

/To Alistair/: "I don't make smart comments about your private life, or rather the lack of it, you stop making comments about mine. Am I perfectly and abundantly clear?”

/About Morrigan/: She's like a barbed arrow - can't get her out without hurting myself even more."

/To Goldanna/: "Well, those children certainly have some fathers, don't they? If they are unwilling to perform their duties, you should be more careful who you lay with next time, or charge them more to cover your expenses."

/About Morrigan/: "Though she certainly has some plans of her own, I can't possibly imagine what she might expect to gain from laying with me since a child from me would poise absolutely no advantage these days. An outlaw without lands or titles, penniless most of the time – not a particularly desirable father; wouldn't you agree? Besides, Morrigan is not exactly a motherly type."

/After the Landsmeet/: "I wanted Loghain not only dead but stripped of everything he ever achieved: his power, his reputation… his daughter. I wanted to see that look on his face when she slandered him in public."

/To Cauthrien/: "I have seen too many blades to be impressed by one more, so kindly put it away unless you wish to try your luck with me right now."

/When first meeting Nathaniel/: "Do you have an idea, Howe, what restraint it costs me not to gut you like I did your father?"

/To Rylock/: "Now, aren’t you a bit too bold for a woman whose head is only loosely attached to her shoulders?"

/Somewhere in the Awakening/: "The Blight was actually a good time. We were the good guys, they were the bad guys, the Archdemon the main goal... and darkspawn didn't talk back." /credits to G'Kar/

Retrieved from "https://dragonage.fandom.com/wiki/User:Ygrain?oldid=450549"
Community content is available under CC-BY-SA unless otherwise noted.