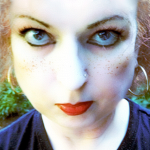 Vometia now edits using her real name, even though it's rather dull in comparison. And a decade after writing the previous sentence seems to have subsequently forgotten about her new policy because it was crap.

Vometia is a first-person videogame character. When she's not busy being an avatar, she's most likely down the pub telling exceptionally poor jokes or lying in a pool of second-hand beer. Or both.

Both Vometia and her long-suffering amanuensist hate the following. A lot.

And anything else that doesn't have the decency to die in a civilised manner. This list will probably grow considerably.

Vometia has also visited Tamriel, The Praesidium, Nagrand, Megaton and various other places. All have been moaned about extensively.

Vom is currently entertaining herself i.e. being grumpy and swearing a lot by modding Oranges. She has eschewed more exciting quest divergences and stats overhauls in favour of adding much-needed jewellery and shoes. L0liana would agree, whatever the derpspurn hurrrrlol might say about the idea.

Rather than faffing about with the templates incessantly, here's somewhere for me to play around with my new tags until I'm happy with the formatting. I know I could create a sandbox page, but... meh. Besides, sandboxes tend to be full of cat poo.

Retrieved from "https://dragonage.fandom.com/wiki/User:Vometia?oldid=867647"
Community content is available under CC-BY-SA unless otherwise noted.