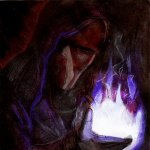 I'm new to the Dragon Age wiki. Been a long time follower for years but decided to finally make an account for the wiki in general.

I hope to get use to the wiki rules and layout as I am not use to them.

Been a BioWare fan since KOTOR first game out and I owned every BioWare game since. I played some of their pre-KOTOR games many years later though. KOTOR is my all time favorite BioWare game and my second all time favorite video game. I don't hold grudges a lot and most of the so called 'mistakes' BioWare makes, in my opinion, are just people trying to find an excuse to complain. Some of its reasonable, but others are not, in my opinion. I'm not one of the vocal Mass Effect 3 or DA2 haters, and I hated the original ME3 ending but the Extended Cut was fine with me. I liked the concept of the ending but it had poor execution.

With Dragon Age 2, it was an okay game. It certainly is not as bad as everyone says, but not that great either. The combat was okay but got boring after a while. The story was also okay and I wasn't annoyed with Origins choices not really affecting the plot b/c reasons why is that Origins set in Ferelden and most, if not all, of the choices in Origins affected Ferelden so I really doubt the choices there will affect Kirkwall, of all places. And I was not upset about not playing races. Its a cool feature, but in my opinion, nothing to be all worked up about. Reused environments was definitely a concern though.

Before any Sony fan/fanboy asks "Why isn't the Last of Us on this list?", its because I still need to buy it and we are not all made of money

NOTE TO MODS OR SOMEONE WHO CAN HELP EALso, can some of the mods or Lazare help me out getting links to pages to work here? Want to post my favorite DA characters and storylines and send links to their pages like others do. Still new to the wiki system.

Retrieved from "https://dragonage.fandom.com/wiki/User:Supergodzilla118?oldid=587833"
Community content is available under CC-BY-SA unless otherwise noted.