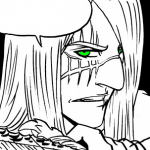 So... I'm new here, though I've read and followed this page for about a year now, just never took the time to actually sit down and join.

So, huge DA fan, love everything about the world of Thedas, to the art of the game, the gameplay, the voice acting, the stories, shows, the books and the comics. I just can't get enough of it.

The whole series has been incredibly inspiring to me as a comics writer and artist. I dream of creating something as believable and engaging as the DA games (and related stuff).

So yeah... about me... I'm 28, I live in a town called Lund in Sweden. I have two cats and are engaged to be married. I work mostly on my comics and spend a lot of time with art and other comic artists in the small comic community here in Sweden.

About my username... I picked Ser Mea since my muse is usually called Nathaniel Mea. He was an old roleplaying character of mine and he's just... stuck around. Nat was created in March 2003 and used in a pen and paper roleplay that lasted 6 years. He then moved on to become my muse and one of my main characters for my webcomic. Iuse this name here because he sort of fits into the world of Thedas, so I shall use his name here.

I was nagged into playing DA by a friend of mine, who wanted to be able to talk to me about the games... so I got them both (close to when the second game was released) and I have been hooked ever since. Having played through DA:O 5-6 times and DA2 about 10 (100% bitches) I can say I have played them more than she (she doesn't like playing games too many times) have and I adore them! I play them on PS3.

Anyway... here are some of my sites.

My webcomic [1] My Tumblr [2] My DeviantArt [3] My main username online is Omegasama.

Retrieved from "https://dragonage.fandom.com/wiki/User:Ser_Mea?oldid=367001"
Community content is available under CC-BY-SA unless otherwise noted.