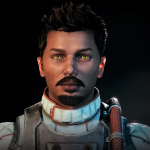 I'm Latino, and a fan of science fiction and fantasy. I have an interest in different genres of stories as well.

"Look up! Look up! The clouds are lifting - the sun is breaking through. We are coming out of the darkness into the light. We are coming into a new world. A kind new world where men will rise above their hate and brutality. The soul of man has been given wings - and at last he is beginning to fly. He is flying into the rainbow - into the light of hope - into the future, that glorious future that belongs to you, to me and to all of us. Look up. Look up." - the Jewish Barber, "The Great Dictator"

Class: Blood Mage/Arcane Warrior/Battle Mage (the arling of Amaranthine). Additional class of Shapeshifter was added (in the search for Morrigan), but only first spell was avaliable.

A Dalish mage of Clan Lavellan who loves his people, accepts magic as a gift of the Creators, believes in the elven pantheon, refutes the religious connotations of the mantle of Herald of Andraste, refuses to convert to the Andrastian faith and views spirits and blood magic as more complex than simple 'good' or 'evil'.

Retrieved from "https://dragonage.fandom.com/wiki/User:Lobsel_Vith?oldid=782362"
Community content is available under CC-BY-SA unless otherwise noted.