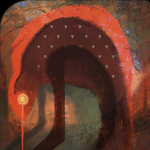 Marian Hawke: Purple. LI Merrill. Feynriel to Dalish, later send to Tevinter Sends Grace and co. back to the Circle or have Varric lie. Offed Petice's second mob single-handedly. Bombed the Arisho(n)k into defeat, while constantly running away form him. Opposed Merrydeath at most opportunities, including at the end.

Ellana Lavellan: SoLavellan/Wolfbait. Fundamentally good-natured, but annoyed by Shemlen zeal, which made her into a calculating Inq. Wents to Redcliffe and recruits mages as allies. Does not trust the Templars and Lord Seeker Lambert one inkling. Inquisition declared as: "An elf will stand for us all" Sorry, Sera. Well, actuallly not. Orlais: Briala with Gaspard puppet Here lies the Abyss: Wardens banished. Until next Blight. What Pride had Wrought: Grudgingly leaves the well to Morrigan, but decides to keep a very close eye on her. JoH: Discloses truth about Ameridan, gleefully. Trespasser: Vowes to save Solas from himself. Torn between still being attached and wanting to move on. Future of the Inquisition: Disbanded.

Retrieved from "https://dragonage.fandom.com/wiki/User:Buckeldemon?oldid=857757"
Community content is available under CC-BY-SA unless otherwise noted.