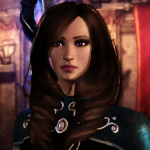 I have been a gamer for several years with a large chunk devoted to MMORPGs. I used to raid and group with friends but as we grew, other personal interests branch of away from the games. Thus, I casually played the MMOs.

I grew frustrated competing with other players for quest pieces and kills. A friend suggested Dragon Age Origins, stating that I will really adore Alistair and the entire story. Course he was right.

Turns out I was an RPGamer and didn't realize it til recently. Sometimes I wish I found this a while ago, but I'm glad that DA:O was the first RP to reel me.

Charming and witty, these heroes turn to humor and sarcasm to lighten a dark situation. Partially hindered by hubris, the rogue heroes will recognize weakness or corruption in hierarchy and rise up to power, believing they are better suited.

Hawke attempted to stay out of the brewing Mage-Templar conflict yet inadvertently fanned the flames. She never saw the Circle as an oppression, and saw it as a necessary organization. She could not forgive mages for heinous acts, ignoring Ander's defense toward their behavior. Although she acknowledged the necessity to execute a certain mage, she was saddened to accept that there would be no end to the conflict without a war. She followed the Templars and was elected Viscount.

Badgley boasts a sharper tongue than her dagger and can talk her way out of hair situations. She has experienced enough betrayal to execute disloyal, however is known to bestow mercy towards pawns or family members of her attackers. Thus sparing Zevran and Nathaniel Howe. However, it was rumored that Zevran seductive charm saved his own life.

Badgley is distrusting of Anora and refused to support her for queen, in favor for Alistair and herself. The Landsmeet finished with a duel with Loghain. Her distrust was confirmed when Anora admitted to not allowing Alistair mercy had she remained queen. Though slightly possessive of Alistair, she allowed Morrigan to perform her ritual as it would was necessary for Ferelden. She defeated the archdemon with Morrigan's ritual and was made Alistair's Queen. The City of Amaranthine was spared and Vigil's keep fully upgraded.

Seductive yet diplomatic, these heroes seek for mages and templars to co-exist with neither having dominant control. They believe all magic should be studied and actions should be condoned not methods. However short-tempered, these magi heroes are known to react violently when backed into a corner.

Retrieved from "https://dragonage.fandom.com/wiki/User:Badgley?oldid=403787"
Community content is available under CC-BY-SA unless otherwise noted.