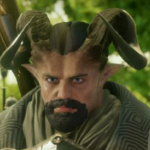 Never before have I been so amazed by the intricate story of a game. Dragon Age: Origins wowed me the very first time I played it. I chose the Human Noble origin, warrior class, and then I watched as the drama unfolded from that waking moment. Ever since I have eagerly awaited the next installment. DA: Awakening came out, Witch hunt went by. Then DA2 came and the plight of the mages exploded out of the screen and started slapping me. Now, I wait... Soon...

Other than DA, I find myself drawn to blowing up robots in a little game franchise called Armored Core, which btw is what the AC stands for.

On another un-game-related note, I'm a math geek. Math. MAAAAAATTTTTHHHHHH. That might be why anyone who works with money/maths in Inquisition will be my best buddy. Also, gonna get my bromance on with Varric and Iron Bull.

Retrieved from "https://dragonage.fandom.com/wiki/User:ACdeakial?oldid=604688"
Community content is available under CC-BY-SA unless otherwise noted.