Urthemiel, the Dragon of Beauty, was a draconic Old God worshiped as the god of beauty in the ancient Tevinter Imperium. Urthemiel was awakened by darkspawn and transformed into an Archdemon in 9:30 Dragon, precipitating the Fifth Blight.

Like the other Old Gods, Urthemiel endorsed the ancient Tevinter Magisters' attempt to reach the Golden City. When his High Priest, who used the alias "Architect of the Works of Beauty", prayed for guidance on whether to join forces with the Conductor of the Choir of Silence, Urthemiel urged his servant to join in the endeavour. [2]

This section contains spoilers for:
Dragon Age: Origins - Awakening.
It is revealed that Urthemiel was found not by the main darkspawn horde, but by the mysterious, sentient darkspawn known as the Architect. After a failed attempt to induce Grey Warden blood to Urthemiel, which the Architect believed would disrupt the Old Gods' hold over the darkspawn, Urthemiel became tainted, beginning the Fifth Blight. 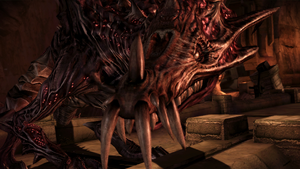 “It was an Archdemon, a dragon tainted by corruption, transformed into a thing of evil with no match in all of Thedas. Save for the Warden, of course.[3]”

Urthemiel is first viewed by The Warden in dreams, before actually witnessing the archdemon firsthand at the Dead Trenches, where it commanded the darkspawn horde to move towards the surface.

Urthemiel led the darkspawn horde to attack Denerim, the capital of Ferelden, where it was promptly slain by the last two Grey Wardens remaining in the country. The Fifth Blight was the shortest in history, ending the same year it began.

If Morrigan performs the ceremony before the final battle to prevent a Grey Warden from dying in order to destroy the archdemon, Urthemiel's soul is transferred into the body of Morrigan's unborn child. She claims that the Old God will not be evil, but simply become a child with his soul.

This section contains spoilers for:
Dragon Age: Asunder.
The likeness of Urthemiel appears in the Fade to disrupt Wynne, Rhys, Adrian, Knight Captain Evangeline and Cole's efforts to find the Pride demon that possessed the Tranquil Pharamond. An intense battle ensues, and ultimately the likeness is driven away. Wynne then reveals that it was actually a demon disguising itself as Urthemiel using her memories of The Battle of Denerim.

Flemeth will locate Kieran and call to him through Morrigan's Eluvian. Within, Flemeth reveals she is possessed by the elven God Mythal and offers Morrigan the choice of giving Kieran to Flemeth or keeping him by her side and thus never being free of Flemeth. Morrigan, believing that Flemeth intends to steal Kieran's body, chooses her son. Flemeth removes Urthemiel's soul from Kieran and takes it into herself.

Retrieved from "https://dragonage.fandom.com/wiki/Urthemiel?oldid=789110"
Community content is available under CC-BY-SA unless otherwise noted.