Under Her Skin is an advisor quest for Leliana in Dragon Age: Inquisition. It is only available if the Inquisitor chooses to side with the templars instead of the mages.

Much like the Inquisition, Corypheus has invested great time and effort building a trusted inner circle. Calpernia leads the Venatori - and it seems she's been busy. In the search for a a particular set of elven ruins, she and her army of Tevinter extremists have taken a keen interest in a merchant named Vicinius. Perhaps finding him would shed more light on Calpernia and her motivations.

Available after talking to Leliana in Skyhold. This quest should be completed before taking on What Pride Had Wrought, as it will unlock additional options when confronting Calpernia.

Travel to Val Royeaux and find Vicinius's Home. It can be accessed from the docks, just north of the Summer Bazaar.

Find papers in the first room, then deal with the Venatori upstairs. Their party consists of two Zealots, one Stalker and a Spellbinder.

Further searching of the home will get you another note (also in the gallery below). In his study, you finally find Vicinius's body. Examine it to get a lead for pieces of a memory crystal, three of which have to be discovered to get an audible memory recording of what has happened here.

Don't overlook the charred notebook in the corner of the room; eventually leave and head back to Skyhold.

Show the memory crystal to Leliana, who will send you to speak with Dagna in the Undercroft.

Note: If Dagna has not yet been recruited, the war table mission Acquire the Arcanist must be completed.

Leliana joins the meeting, and after viewing some mysterious event and discussing it, a new war table operation becomes available: head to the War Room and complete Plant Crystal in Venatori Headquarters with Leliana. After the report, visit her in her tower, to see if the receiving crystal is working. Reports to Calpernia will be stored in your codex, and information about a location connected to Dumat is needed. Return to the War Room and let Leliana for the cost of 1 power investigate the Shrine of Dumat.

Use the world map to travel to the Shrine of Dumat.

The Inquisitor can approach the front door by either going straight forward or along the terraces on either side. Moving along either terrace will cause a rift-like spawning of a Rage demon, two Shades and two Wraiths, though there is only one wave. If not triggered on the way in, it may also be triggered on the way out.

Inside, you will have to fight some Shades, Wraiths and Greater Terror Demons. There are six red glowing crystals scattered across the area. Activating any one of them will activate the side quest Corypheus's Memories.

Note: The Superb Dragon-Slaying Rune Schematic may be found in a bag on a desk on the lower floor

Once you move past the main hall, you will find the door to the next chamber guarded by a Pride demon, a shade and two wraiths. Beyond this door Magister Erasthenes can be found locked behind some sort of a magical barrier at the far end of the Shrine. Talk to him to learn more about Corypheus and Calpernia and then decide his fate. Whether you kill him or let him live, however, there will be no major effect to the game progress.

Back at Skyhold, inform Leliana about the Magister to finish the quest. If you let Erasthenes live earlier, Leliana says that she (i.e. her agent) has interrogated him in the shrine and states that the Inquisition may learn more about Corypheus from him. If he was subjected to Tranquility, she also notes that he is as grateful to you for ending his pain as his muted emotions allow. If you choose to kill Erasthenes, Leliana will be a little bit upset about your decision, arguing that it would be better if you had let him live so that she could gather more information about Corypheus' mission.

I'll free you from your pain. (Kill Erasthenes)

You're too useful to kill. (Let Erasthenes live)

Your death will be a message. (Kill Erasthenes)

(Mage only) I can make you Tranquil. (Let Erasthenes live)

Note: Cole will react to the player's decision whether he is in the party or not.

Codex entry: Letter to a Slaver 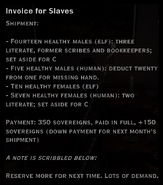 Retrieved from "https://dragonage.fandom.com/wiki/Under_Her_Skin?oldid=869865"
Community content is available under CC-BY-SA unless otherwise noted.