Tuskets are pig-like animals that inhabit various regions of Ferelden and Orlais. Tuskets are characterized by their hairless body, upturned snout, and two pairs of backward-curved tusks. Their horns are also used in a widely-known folk remedy.

The curving tusks protruding from the snout are present in both males and females of the species. Rarely used in combat, the upper tusks play an important part in mate selection. It's believed that tuskets choose prospective mates based not only on the size, but also on the curve and even slight color variation found in another's tusks. Considering tuskets bond for life, careful mate selection is crucial to the continued success of the herd. Bonded tuskets have been seen gently clicking their tusks together as a sign of affection. The role of the tusket's signature ornamentation in the mating process led to an unfortunate rumor that their tusks could increase virility in other species. Although usually docile, tuskets will defend themselves if cornered (or if someone attempts to saw off part of their anatomy). It's said Baron Vandermine lost three servants this way.

—From Observed Behaviors in the Common Tusket by Tilda Adere[1]

Tuskets can be found wading through the shallow Intrinsic Pool in the Forbidden Oasis of western Orlais. They also roam through the wetter climate regions of the Storm Coast and the Frostback Basin in Ferelden. In the Basin, the rare Imbued Tusket can be found. It is recognizable by its pink back (as opposed to the common tusket's light gray) and is considerably sturdier. 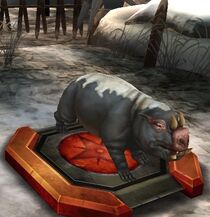 A tusket in Heroes of Dragon Age 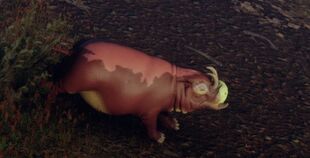