Start a Wiki
watch 01:16
What is the Trespasser DLC?
Do you like this video?

For the all items found in Trespasser, see Items (Trespasser).

Trespasser is the third and final downloadable content released for single-player in Dragon Age: Inquisition. Announced on August 29, 2015, it was released September 8, 2015, for PC, PlayStation 4, and Xbox One. Cost: $14.99 USD.

Go to the War Room in Skyhold to begin the DLC, from there you will attend the Exalted Council (in Orlais). Requires 8 power to start.

Having defeated Corypheus and closed The Breach, the Inquisition's reputation is in a shambles as the Inquisitor faces the demands of Ferelden and Orlais, as well as the scrutiny of the Chantry.

To add to the turmoil, Qunari invaders have made use of the eluvians to attack the Inquisition, and the Inquisitor's mark has begun to act up once more as they begin to traverse the seemingly forbidden pathways of the eluvians as well. And in the midst of it all, Solas reappears to offer some long-awaited answers.[2][3]

Sera's Past and Now Things
Note: Wolf's Welcome
Note: The Lies of the Evanuris
Note: The Promise of Fen'Harel
Note: The Lifting of the Vallaslin
Note: Half-Finished Poem
Note: A Reminder

The Treachery of the Wolf
Note: Charred Note
Note: Scrap of Writing from a Ben-Hassrath Agent 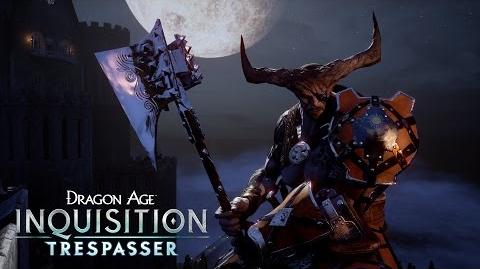