The Tower of Ishal is a tower located to the east of the abandoned fortress of Ostagar and plays an important role in King Cailan's plans to defeat the darkspawn during the Fifth Blight.

The Tower of Ishal was constructed by the Tevinter Imperium along with the rest of the fortress of Ostagar during the height of its power as a fortification against the Chasind of the Korcari Wilds. The tower was named after the Archon that ordered its construction. After the First Blight the whole of Ostagar, along with the tower, was abandoned and fell into disrepair but the tower still stands strong several hundred years later. A Tower Guard claims the tower is dwarven-made.

The entrance to the Tower of Ishal is located to the east of Ostagar. While in the process of Joining the Grey Wardens, the Warden can speak to the tower guard located outside the tower to find out a bit about its history.

At the beginning of the Battle of Ostagar, during the Tower of Ishal (quest), the tower is overrun by darkspawn coming through tunnels beneath the tower. The Warden, along with Alistair, are tasked to enter the tower, reach its top, and light the beacon in order for Teyrn Loghain's troops to attack the darkspawn horde from behind. After Ferelden's defeat at Ostagar, the tower is taken over by darkspawn.

The first floor of the Tower of Ishal can be revisited, as well as the darkspawn-created tunnels beneath the tower, as part of the Return to Ostagar (quest). This requires the Return to Ostagar DLC. Note that other floors cannot be accessed as the entrance to the second floor is barricaded.

Codex entry: The History of the Chantry: Chapter 1, discarded book on second floor 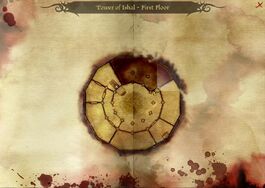 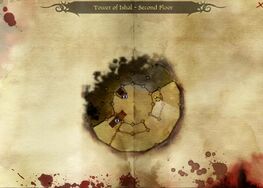 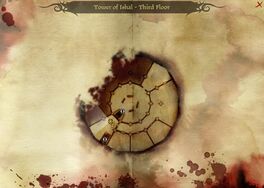 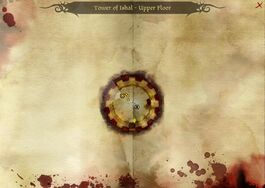 Map of Tower of Ishal - Upper Floor
Add a photo to this gallery
Retrieved from "https://dragonage.fandom.com/wiki/Tower_of_Ishal?oldid=880162"
Community content is available under CC-BY-SA unless otherwise noted.