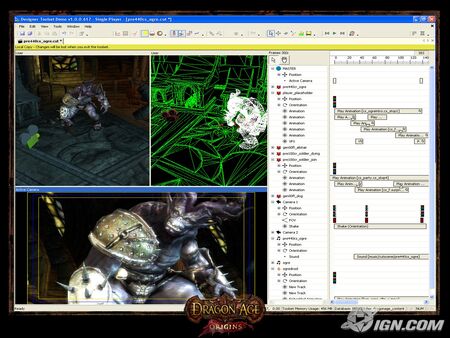 BioWare has released a 'developer-grade' toolset (the same one that they used to make Dragon Age: Origins) to allow modification and customization of the game (including the editing of saved games). Users of the toolset have the ability to customize individual game features such as enemy AI and character creation. They also gain the ability to create new and unique stand-alone games.

The toolset has only been released with the PC edition of the game. It is not included on the game disc, but is a free download from the Dragon Age community site. The Dragon Age toolset is English only, but is able to create content for any language that Dragon Age: Origins supports.

Note: The toolset is 507MB in size. Slower internet connections may have trouble downloading it.

The script editor features auto-complete and a built-in help. Recent events showed that it features tons of new functions and script templates as well.

Here's a sample of what can be done by script:

The level editor allows users to create new indoor and outdoor levels for their modules. Buildings can also be placed in it. It is also possible to create buildings using walls, a floor, and roofs manually. Roofs could be set to vanish when in front of player view. This would allow entering buildings without any transitions of any sort. Level creation is done differently for interiors and exteriors. For exteriors, the users will have a terrain mesh that they can deform, add water planes, place props, and scatter trees and grasses. Terrain can be deformed using an assortment of different brushes. The confirmed brushes are raise/lower, extrude, smooth and plateau. Texturing terrain is confirmed to be as simple as painting the terrain using a brush. Users can blend up to 3 textures simultaneously, and can have up to 8 terrain textures per level. There are a few more tools that help with texturing. There is currently a blur and a relax tool. The blur tool is mostly used when the user has configured a brush to have no feathering to provide nicer transitions. The relax tool is used when you stretch the terrain verts out so that the terrain texels become huge. The relax tool attempts to balance out the UV coordinates to make it look nicer. For interiors the user only places props but you can organize them into rooms.

A senior programmer at Bioware claimed that all the interior and exterior levels in the game were made using the level editor. It has been confirmed that the user will be able to create overhangs. The user can't edit the terrain verticals directly, however. It is important to note that you can't walk under a bridge since the pathfinding data does not support this. If the user places a bridge over a chasm the user will get pathfinding on top of the bridge, but not under it. A character could be driven underneath, but if the player tried to walk under the bridge by clicking, it would walk all the way around. The AI would also be incapable of walking underneath the bridge. These same principles apply to the overhanging terrain, so using that should be done with care. The user can also create multiple water planes per level and assign them to any 3D coordinate. The user is allowed to scale (within certain limits) visual effects (VFX) and trees/grasses, but not regular art props. This was a limitation imposed for technical reasons.

The area editor is for adding in creatures, triggers, placeables, sounds, etc. When placeables are placed, the user has complete freedom over its placement. The object can be fully translated or rotated in 3D.

The conversation editor uses an enhanced version of the conversation tree method that was used in Neverwinter Nights. Now, the user can easily make lines that will only appear once, greetings that will only be said once per day, etc. Some videos of the editor also showed that it is tied to the plot editor allowing the user to easily change plot flags during dialogues. It is also possible to add emotion to a character when he speaks a line.

The Plot Editor is really simple and powerful at the same time. With it, the user can create new quests. Each quest flag can be triggered in a lot of ways. In a developer demo, it was shown that killing a team of monsters (set by the user) could automatically trigger a change in the plot without any script of any kind. Branches of dialogue can be set to appear only if a certain flag is set to true, making quest NPCs a lot easier to do. Recent events showed that a plot variable could easily be included in a script in a simple line.

The cutscene editor is one of the breakthrough features of the toolset. It will allow users to create their own cutscenes in their modules without any scripting of any kind. Users can set their own camera in 3D as well as assign the different animations and line of dialogues to the various NPCs. Music and sound can also be added during a cutscene. The user can set the volume and trigger off each one in the area. It is possible to add blood splatter on an NPC with a simple property and a slider. A cutscene is limited to 9,999 frames. A frame's length has not been specified yet. A developer said that a cut scene could eventually call another cutscene when it ends using a script.

Recent events showed that a module could be packaged in a single file that could be easily installed by the player.

Recent events showed that it was made easy for different users to share parts of some module using an Export/Import method. This way, it would be possible for module builders to make a module in group without too much difficulty. It is also possible to import saved games, edit them, and save (export) the results. See save game editing for more information.

Importing assets, such as textures, models, and sound will be possible. Scott Meadows, a BioWare senior programmer, said that they know it is required and that they have planned on providing file formats and wiki instructions on how to do it.

Note: this is not intended as a beginners tutorial in using the toolset, new users may find this difficult to follow.

Retrieved from "https://dragonage.fandom.com/wiki/Toolset?oldid=814801"
Community content is available under CC-BY-SA unless otherwise noted.