For the Templar ability, see Wrath of Heaven (ability).

The Wrath of Heaven

The Wrath of Heaven is the first main quest in Dragon Age: Inquisition. It follows a lone survivor's involvement surrounding a mysterious explosion that occurs at the Temple of Sacred Ashes, located in the outskirts of the nearby village of Haven, and their journey to discover the truth.

The Temple of Sacred Ashes was at the heart of the blast that tore open the sky. Reach the temple and see what can be done.

This quest is received automatically at the start of the game.

Note: See Area Map at bottom of article for Map

A lone survivor awakes, finding themselves in the Fade. Trying to find a way to escape, "the Inquisitor" sees a golden woman in a rayed-crown who reaches out her hand to them. The Inquisitor is then able to exit the Fade, only to lose consciousness afterwards.

Get to the rift with Cassandra[edit | edit source]

At the end of the dialogue the player gains control of the Inquisitor. In the remainder part of the quest, several tutorials and instructions will be given to the player.

Head towards the gates on the far side of the bridge and then southwest up the hill. At the top of the hill the mark pulses, making the player fall to the ground and triggering another cutscene. While crossing the bridge at the top of the hill, it will collapse. Shortly afterwards, the first fight occurs with a lesser shade and the Inquisitor will be given their first (class-specific) weapon.

Following the fight, Cassandra will turn on the Inquisitor and demand that they drop their weapon. Regardless of the answer she realizes that she is not able to defend the Inquisitor alone and lets them keep the weapon. Cassandra will give you healing potions at this point. Behind you on the ice is a lootable demon drop containing a shadow essence research item that starts the quest Know Thy Enemy (if you miss this one picking up another from any of the following enemies starts the quest). Ahead is a lootable body that contains a class specific helmet. An introduction to the inventory will follow.

Climbing up onto the banks the player comes upon more lesser shades and up on the bank is some more loot, gold, and spread along the riverbanks are multiple iron deposits and elfroot plants that can to be harvested. Continuing west up the frozen river there are more shades and wraiths, introducing ranged enemies. Explore the rest of the river before climbing the stairs that go around the blockage in the path of the frozen river. On the way, more shades and wraiths will be encountered.

Upstairs, the Inquisitor and Cassandra encounter Solas and Varric, fighting off several shades that appear to have come from a nearby rift. Once the shades are dispatched, a cutscene triggers where Solas holds the Inquisitor's hand up to close the rift using the mark. Solas explains that he does not believe that the Inquisitor is behind the opening of the Breach, but that the mark may nevertheless be the key to closing it. Both Varric and Solas join the party after the conversation. In this area is a lootable body and some gold.

Jump over the destroyed wall and head down the hill to the frozen river again. In the river is some iron and a lootable body that contains a Figurine of Maferath the Betrayer. Ahead the terrain opens up again; there are both a greater shade and lesser shades with some wraiths waiting. The tactical camera mode is then introduced. There are three areas of interest for loot - the completely intact house on the eastern edge of the open area, the destroyed burning house also and the path up to the cliff face in southwest corner of the frozen river (a lifeward amulet can be looted here). In this area are also some more iron and elfroot resources. The return trip from that path will generate some party banter which would otherwise be missed.

Once you return to the open area, take the stairs to the west that climb the hillside to the north. There are more shades and wraiths about halfway up the hill and at the top of the hill. Dispatch the enemies and use the mark to close the nearby rift in order to gain entry to the forward camp. Inside the camp is a supply cache, which refills the party's potions. A conversation triggers between Leliana and High Chancellor Roderick. The party must then decide which path to take to reach the temple. They may choose to charge with the soldiers or take the mountain path.

No matter which path is chosen, the party will shortly reach the ruined temple.

Upon entering the temple the player can see the massive rift that has been opened by the explosion. The Inquisitor confers briefly with Cassandra and Leliana, who has joined with a group of soldiers. The soldiers disperse to cover the area and prepare for demons to appear. Solas will confirm that this rift must indeed be closed.

As the party makes their way around the temple to the stairs leading down to the rift they hear a loud and powerful voice, which triggers some reactions. Varric will also comment on the red lyrium in this area.

Solas states that the rift here is closed but not sealed. In order to seal it, the Inquisitor must reopen the rift which may allow more demons to spawn temporarily. Cassandra orders her soldiers to prepare to fight off the demons that are sure to cross through the veil once the rift has been opened. Almost immediately after this a pride demon appears, starting a boss fight. The demon must be killed before the rift can be sealed. A final cutscene triggers, after which the quest is completed.

For assistance with defeating the demon, see Pride demon (strategy).

Cassandra: It may be the key to stopping this, but there isn't much time.

Varric: He means, "I kept that mark from killing you while you slept."

If "You know about the mark?" is chosen above:
Solas: If it is not closed, we are all doomed, regardless of origin.

Roderick: We must elect a replacement, and obey her orders on the matter!

Cassandra: How do you think we should proceed?

On the mountain path:
Lieutenant: The prisoner? Then you...?

On the soldiers' path:
Cullen: We've lost a lot of people getting you here.

Codex entry: The Circle of Magi (Human mage Inquisitor only) 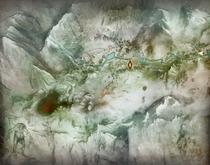 Map of the Frostback Mountains
Add a photo to this gallery

Retrieved from "https://dragonage.fandom.com/wiki/The_Wrath_of_Heaven?oldid=883956"
Community content is available under CC-BY-SA unless otherwise noted.