Bastion of the Pure

The Wellspring is a gargantuan cavern in the Uncharted Abyss situated far beneath the Deep Roads.

Its scale in both depth and length are so massive that it has formed its own ecosystem with clouds and a local fauna and flora. There is also an unknown light source inside the Wellspring.

The verdant cavern is in fact a space within a titan. Infused with huge veins of lyrium throughout, the Wellspring is also filled with dwarven structures inhabited by the Sha-Brytol.

Shaper Valta and the Inquisitor reach the wellspring after a grueling trek through the Deep Roads and the caverns beneath them as part of The Descent (quest). After an encounter with the Guardian at the lyrium heart at the center of the wellspring, Valta is somehow altered by her exposure and resolves to remain behind to investigate further. Later the Inquisition is alerted to a disturbance nearby and sends a team to investigate if Valta needs assistance, only to discover that the passage to the Wellspring has been sealed up as if it were never there and the stone repels all efforts to break through.

A Cry in the Dark

Stone-Breaker - looted from the Guardian.

Tezpadam's Bane - looted from the Guardian. 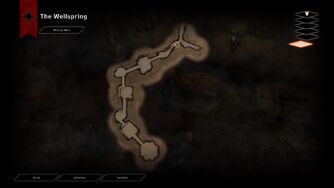 Map of The Wellspring 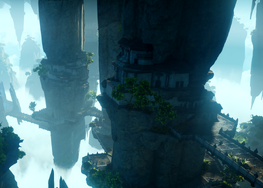 Dwarven structures within the Wellspring
Community content is available under CC-BY-SA unless otherwise noted.
Advertisement