Edit
watch 03:41
Solving Puzzles For The Tomb Of Fairel
Do you like this video?
Play Sound

The Tomb of Fairel is a side quest in Dragon Age: Inquisition.

Rumors tell of a grand treasure buried in a tomb in the Hissing Wastes. Explore the Wastes, using any available clues and maps to find it.

Obtained after arriving in the Hissing Wastes.

The Inquisitor must find five tombs which will each hold a key fragment. The key fragments, once all are collected, will unlock the door of the tomb of Paragon Fairel.

There are six maps, one for each tomb, but finding a map is not required before going to a tomb. The maps are:

A puzzle must be solved inside each tomb in order to unlock the final chamber which holds a chest full of loot plus the key fragment. The puzzle involves lighting braziers with Veilfire in the correct order. The order is established by reading the four nearby stone tablets about the story of Fairel. Arrange the phrases into a coherent verse and light the braziers in that order.

All the verses can be found in Codex entry: Dwarven Inscriptions: Hissing Wastes which will update each time one of the puzzles is solve. If an incorrect brazier is lit, Ancient tomb guardians and Burning tomb guardians are released from the walls. If Cole is in the active party he will comment on the gangues: "They were Dwarves. They think they still are. They sound like dust tastes."

The Four Pillar Tomb is located near the Sand Crags Inquisition Camp. Enter the tomb, light the braziers in the correct order and loot the large chest for the quest key fragment. The order is as follows:

Note: Codex entry: Demons of the Stone can be found in the tomb.

The Canyon Tomb is located in the canyon northeast of the Logging Inquisition Camp. Defeat the spiders in the canyon and enter the tomb. Light the braziers in the correct order and loot the large chest for the quest key fragment. The order is as follows:

After many years Fairel, greatest of Paragons, could not bear life's burden.
And with the burden growing, he called his sons to his bedside.
He bade each son swear he would take care of his brother,
and the brothers swore, and mourned when their father returned to the Stone.

The Burial Grounds Tomb is located south of the Logging Inquisition Camp. Light the braziers in the correct order:

Fairel's sons built monuments to their father, locking away his great works,
and worked together, for a time, side by side. Each ruled half the thaig,
but each ruled differently. They argued, and heated words made the brothers duel,
And where one brother fell, the others raised bloodied axe in hand, alone.

The Colossus Tomb is located north of the Statue Inquisition Camp. Defeat the spiders swarming the tomb and light the braziers in the correct order:

Fairel, Paragon, fled from the strife his brilliance created,
The strife that destroyed thaigs, sundered houses, from weapons that clan used against clan.
His own clan and his two sons followed Fairel to the pitiless surface,
The surface where they would hide from the war that took their home.

The Sunstop Mountain Tomb is located east of the Mountain Fortress Inquisition Camp (follow the path northeast), towards the Ocularum found at the Mountain Fortress Inquisition Camp. Climb down the ladders to enter the tomb and light the braziers in the correct order. A Superb Fire Rune Schematic will be found about halfway down, which can be revealed with veilfire. The correct order of phrases is as follows:

The sun burned above oceans of sand,
but in the sand was Stone, strong and true.
Fairel hewed the Stone, and built──as great as any thaig in the deep.
And with his sons' help, he ensured the thaig prospered and grew.

Once all of the key fragments have been collected, head to the Tomb of Fairel which is located east of the Sand Crags Inquisition Camp, just before the edge of the World map, pass through two pillars, located towards the back of a crater. The Sandy Howler high dragon will be resting in the area, to avoid a confrontation stick to the edge of the crater. Once inside the tomb, looting the chest completes the quest and updates Codex entry: Dwarven Inscriptions: Hissing Wastes.

Codex entry: Demons of the Stone 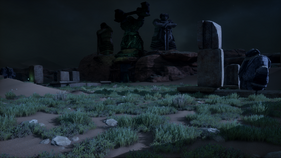 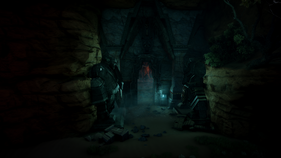 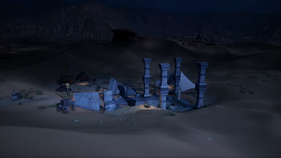 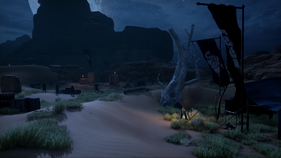 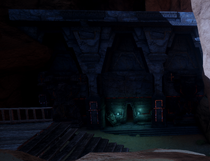 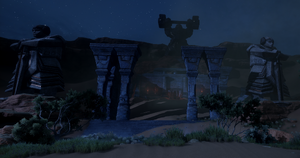