The Tiniest Cave is a hidden side quest in Dragon Age: Inquisition.

Someone or something has stirred inside the tiniest mouth of the tiniest cave in the Emerald Graves. Now it demands crystal grace.

There is a small rock formation hidden behind some bushes near a mural located east of the Direstone Inquisition Camp in the Emerald Graves. (See gallery for exact location.) The quest is obtained by jumping on top of the rocks approximately 50 times (sometimes more, sometimes less) until a voice is heard.

After the first time that the voice speaks, running a short distance away and then approaching it again will trigger different lines of dialogue. Do this until the voice says, "Need more! More. Have to be ready." At this point, the quest will activate in your journal.

Jumping on the cave while the voice is saying newly triggered dialogue may help activate the quest.

Crystal Grace at the cave.

At this point the voice should say, "The stairs! The stairs that go down. Way down. Way, way down. I'll be there. You'll be there." There is a chance of triggering one of the cave's other lines of dialogue instead, but this shouldn't interfere with the completion of the quest or ability to obtain the unique helm.

As soon as the crystal grace is placed on the cave, the quest will complete.

However, this strange raving is actually a clue to a hidden area in Emprise du Lion. At the end of a tunnel that hugs the base of Suledin Keep, there is a hidden entrance to a secret area. Approach the tunnel from the south side of the keep. The keep does not have to be captured as you cannot reach this area by passing through and must go around. (See exact path to the location in gallery.) The entrance is found to the left (west on the compass) of a veilfire brazier found at the end of this tunnel and behind an illusionary section of rock.

This section should be easy to locate as it is off color from the rest of the wall and looks far less detailed than the surrounding rocks. There is also a wooden piece of debris beside it that looks to be either a fallen section of wall or ceiling. Behind this debris is also a plank of wood that can be climbed in order to reach the entrance. Once you've gotten to the false wall, you can pass right through it with no resistance.

At the bottom of a very long series of stairs is a single chest. Loot the chest to complete the hidden part of the quest.

Completing the quest in the Emerald Graves yields: 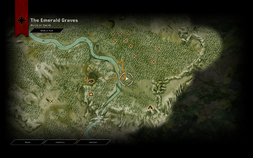 Location of the "Cave" in the Graves 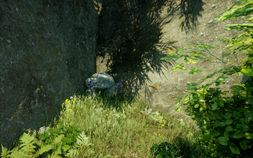 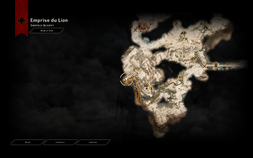 How to reach the steps through Emprise Du Lion 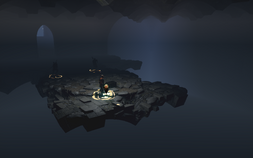 The room in which the chest is found 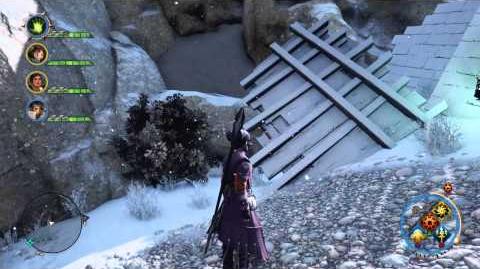 Video that shows how to get to the staircase.
Community content is available under CC-BY-SA unless otherwise noted.
Advertisement