The Spoiled Princess is an inn located at the Lake Calenhad Docks.

According to the innkeeper, the inn is named after his sister, who was their father's "little princess." She moved to Denerim because she wanted to live somewhere "more glamorous," but she was eventually robbed and murdered. Her father passed away in despair, her mother stopped eating, and the innkeeper inherited the inn and kept the name.

Love Letter, in a locked chest 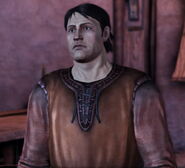 Larana
Add a photo to this gallery
Retrieved from "https://dragonage.fandom.com/wiki/The_Spoiled_Princess?oldid=592469"
Community content is available under CC-BY-SA unless otherwise noted.