The Scrolls of Banastor is a side quest obtainable from The Mages' Collective Quest Board. The Collective requests that an individual with a certain moral flexibility scour Ferelden for five ancient and powerful Scrolls of Banastor. The scrolls contain information pertaining to "dark and terrible" blood magic rituals.

Depending on how soon you acquire this quest, it can go one of three ways:

The location of the five scrolls are as follows: 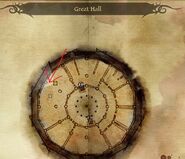 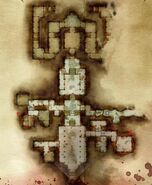 Ruined temple (first floor), The Scrolls of Banastor locations {Note: The location of the first scroll is marked incorrectly on the map. Check the room just above, on the left.}

Lair of the Werewolves, The Scrolls of Banastor location
Add a photo to this gallery

Retrieved from "https://dragonage.fandom.com/wiki/The_Scrolls_of_Banastor?oldid=801565"
Community content is available under CC-BY-SA unless otherwise noted.